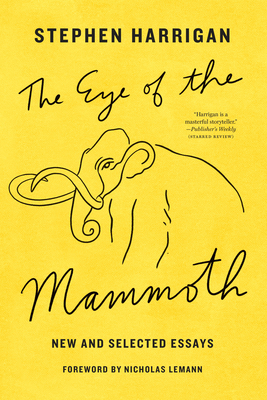 The Eye of the Mammoth

History—natural history, human history, and personal history—and place are the cornerstones of The Eye of the Mammoth. Stephen Harrigan's career has taken him from the Alaska Highway to the Chihuahuan Desert, from the casinos of Monaco to his ancestors' village in the Czech Republic. And now, in this new edition, he movingly recounts in "Off Course" a quest to learn all he can about his father, who died in a plane crash six months before he was born.

Harrigan's deceptively straightforward voice belies an intense curiosity about things that, by his own admission, may be "unknowable." Certainly, we are limited in what we can know about the inner life of George Washington, the last days of Davy Crockett, the motives of a caged tiger, or a father we never met, but Harrigan's gift—a gift that has also made him an award-winning novelist—is to bring readers closer to such things, to make them less remote, just as a cave painting in the title essay eerily transmits the living stare of a long-extinct mammoth.

Stephen Harrigan is the author of nine books of fiction and nonfiction, among them the critically acclaimed and best-selling novel The Gates of the Alamo, and two previous collections of essays, A Natural State and Comanche Midnight. His most recent novel, Remember Ben Clayton, won the Jesse H. Jones award for best work of fiction from the Texas Institute of Letters and the Spur Award from the Western Writers of America. He is a longtime writer for Texas Monthly, and has contributed articles and essays to a wide variety of other magazines. Harrigan is also an award-winning screenwriter who has written many movies for television.
Loading...
or
Not Currently Available for Direct Purchase