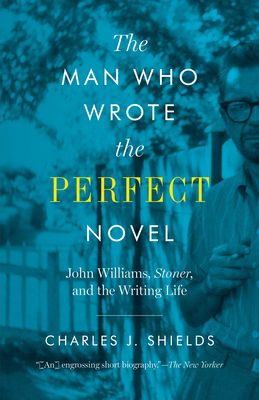 The Man Who Wrote the Perfect Novel

When Stoner was published in 1965, the novel sold only a couple of thousand copies before disappearing with hardly a trace. Yet John Williams’s quietly powerful tale of a Midwestern college professor, William Stoner, whose life becomes a parable of solitude and anguish eventually found an admiring audience in America and especially in Europe. The New York Times called Stoner “a perfect novel,” and a host of writers and critics, including Colum McCann, Julian Barnes, Bret Easton Ellis, Ian McEwan, Emma Straub, Ruth Rendell, C. P. Snow, and Irving Howe, praised its artistry. The New Yorker deemed it “a masterly portrait of a truly virtuous and dedicated man.”

The Man Who Wrote the Perfect Novel traces the life of Stoner’s author, John Williams. Acclaimed biographer Charles J. Shields follows the whole arc of Williams’s life, which in many ways paralleled that of his titular character, from their shared working-class backgrounds to their undistinguished careers in the halls of academia. Shields vividly recounts Williams’s development as an author, whose other works include the novels Butcher’s Crossing and Augustus (for the latter, Williams shared the 1972 National Book Award). Shields also reveals the astonishing afterlife of Stoner, which garnered new fans with each American reissue, and then became a bestseller all over Europe after Dutch publisher Lebowski brought out a translation in 2013. Since then, Stoner has been published in twenty-one countries and has sold over a million copies.


Praise For The Man Who Wrote the Perfect Novel: John Williams, Stoner, and the Writing Life…

Shields…hoovers up the available evidence and shapes it into an episodic narrative without giving much sense of what he makes of his subject…Shields's book is a handy corrective for anyone who's nostalgic for the days when American writers and publishers routinely ran up large bar tabs.
— London Review of Books

This rich biography gives new insight into the enigmatic man behind Stoner, a novel quickly forgotten after its 1963 publication but more recently recognized as a midcentury American classic.
— Publishers Weekly, “The Most Anticipated Books of Fall 2018”

The Williams that emerges is not unlike <i>Stoner</i> himself: self-obsessed, given to petty feuds, and insecure about his abilities...It is to Shields’s credit that by the end of this finely crafted biography readers will feel they have some insight into this talented, troubled enigma of a man.
— Publisher's Weekly, Starred Review

Despite obvious parallels with his fictional university protagonist, John Williams is both different and interesting enough to merit a book of his own, Charles J. Shields's The Man Who Wrote the Perfect Novel. It certainly helps that, like Williams, Shields know how to tell a good story, one that will appeal especially to those interested in the ins and outs of the publishing industry and the ups and downs of a writer's life.
— Los Angeles Review of Books

Charles Shields has done us all a service by pointing up and pointing out the novelist's unyielding ambition and rigor.
— New York Journal of Books

[An] exemplary biography, the first devoted to the life of one of America's most unusual writers.
— Financial Times

Through exhaustive research and sharp prose, Shields has composed a portrait of the complicated author and the particular darknesses that drove Williams to write, to overcompensate, to philander, to mansplain.
— The Millions

Brief but compelling...The Man Who Wrote the Perfect Novel is a welcome reminder that even in the rarefied world of literature, good sometimes prevails.
— Waterbury Republican-American

Shields' writing is captivating and reveals much about the wounded psyches of the GI Bill generation of American (male) authors.
— Shepherd Express

Shields describes Williams's development and motivations and explains persuasively why a writer hungry for fame didn't go in for the postmodernist experiments of his time.
— New Criterion

Shields accomplishes an admirable feat of objectivity in a biography published during our riven age of identity and tribal politics.
— American Book Review

[John Williams's Stoner] has in recent decades become the sort of book that people adore, give to their friends, fiercely identify with, and dub 'the perfect novel.' And full credit to Charles Shields for going behind the scenes to fill in the picture of Williams's own—somewhat similarly miserable—life…Stoner's rediscovery reflects well on the artisanship of John Williams, a novelist whose accomplishments and foibles Charles Shields has brought ably into view.
— Western American Literature

Charles Shields's biography of John Williams invites us to enrich our understanding of Stoner—and Williams's other writings as well—in The Man Who Wrote the Perfect Novel. Through his accessible style, his scrupulous attention to detail, and his use of source material and interviews, Shields provides us with a balanced study of a writer whose work has the power to transform the unremarkable into the astonishing.
— Journal of American Culture

Charles J. Shields' subtitle accurately captures the scope, purpose, and content of the book. It's a biography of John Williams. It's a description of how Williams's major work came to be, and it's a reflection on the writing life, as lived by John Williams. I found Shields to be fair in his approach to all three.
— Concho River Review

<p>Charles J. Shields is the author of <i>Mockingbird: A Portrait of Harper Lee</i>, a <i>New York Times</i> bestseller, a Literary Guild Selection, and a Book-of-the-Month Club Alternate. His young adult biography of Harper Lee,<i> I Am Scout</i>, was chosen an ALA Best Book for Young Adults, a Bank Street Best Children’s Book of the Year, and a Junior Literary Guild Selection. In 2011, Shields published <i>And So It Goes: Kurt Vonnegut, A Life</i>, a <i>New York Times</i> and <i>Washington Post</i> Notable Nonfiction Book of the Year.</p>
Loading...
or support indie stores by buying on