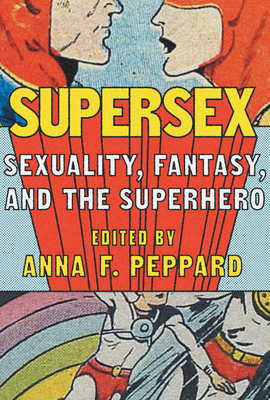 From Superman and Batman to the X-Men and Young Avengers, Supersex interrogates the relationship between heroism and sexuality, shedding new light on our fantasies of both.

From Superman, created in 1938, to the transmedia DC and Marvel universes of today, superheroes have always been sexy. And their sexiness has always been controversial, inspiring censorship and moral panic. Yet though it has inspired jokes and innuendos, accusations of moral depravity, and sporadic academic discourse, the topic of superhero sexuality is like superhero sexuality itself—seemingly obvious yet conspicuously absent. Supersex: Sexuality, Fantasy, and the Superhero is the first scholarly book specifically devoted to unpacking the superhero genre’s complicated relationship with sexuality.


Exploring sexual themes and imagery within mainstream comic books, television shows, and films as well as independent and explicitly pornographic productions catering to various orientations and kinks, Supersex offers a fresh—and lascivious—perspective on the superhero genre’s historical and contemporary popularity. Across fourteen essays touching on Superman, Batman, the X-Men, and many others, Anna F. Peppard and her contributors present superhero sexuality as both dangerously exciting and excitingly dangerous, encapsulating the superhero genre’s worst impulses and its most productively rebellious ones. Supersex argues that sex is at the heart of our fascination with superheroes, even—and sometimes especially—when the capes and tights stay on.

Insightful...Peppard’s assemblage shows just how varied and multivalent superhero media is, as well as highlighting the diversity of experiences and interpretations of it. Supersex is a broad cultural survey of superheroes, with insights that are beguiling fuel for the critical imagination.
— Foreword Reviews

Peppard's introduction is a brilliant overview of the history of superhero bodies that perfectly sets the stage for the essays that follow, and the epilogue by Richard Harrison is an inspired piece that provides a satisfying summation for this eclectic collection. Supersex is intelligent and entertaining and, for comics fans, it opens new avenues for thinking about how superheroes affect readers and culture.
— Comic Book Yeti

If the stated task of assembling a volume dedicated to 'unpacking the superhero genre’s complicated relationship with sexuality' does seem not impressive enough, Peppard has also managed to curate a book that is utterly enjoyable to read. In other words, the sexiness of this collection is tied not only to its intellectual contributions, but also to its affective power—at times I felt downright naughty for reveling in Supersex as much as I did...[Supersex is] strong...from cover to cover.
— Inks: The Journal of the Comics Studies Society

This thoughtful, up-to-date collection pursues questions anyone who studies superheroes will want to answer...We can do more—and this volume can help us do more—to spot, to interpret, and sometimes even to champion the exceptions, the comics that work on behalf of the readers who want them, against the now all too familiar hetero-patriarchal rules.
— Journal of Graphic Novels and Comics

Supersex offers an in-depth starting point to examine superhero sexuality and eroticism...The chapters are not just a collection, but a dialogue that allows for a subjective multiplicity that ultimately provides a rich tapestry of insights that are interlinked even (or especially) when they are contradictory...[Supersex] offers a wonderful exploration of the contradictions inherent to supersex.
— Journal of American Studies

From the queering of costume to weapons and war, shapeshifting characters, and buddy systems, Supersex takes the subject to places not usually explored, creating a solid foundation for future scholars and critics...Supersex is a long, rich academic book; however, it’s highly accessible and written with enthusiasm and verve...curious readers seek something a little weightier and will find plenty to ponder.
— Women Write about Comics

[A] fantastic collection...Supersex presents an intriguing and analytical look at a topic that has been taboo for many scholars. The breadth of the chapters makes it an invaluable text for the future of superhero studies, sexuality studies, queer studies, and any intersections between these fields. Furthermore, many of these essays will hopefully become jumping off points for future analytical responses to sexuality within superhero comics.
— ImageTexT