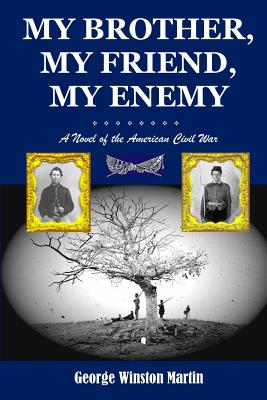 My Brother, My Friend, My Enemy

A Novel of the American Civil War

Caught up in the calamity of a nation teetering on the brink of Civil War, two brothers, both Southern-born but separated by hundreds of miles and vastly differing traditions, struggle to find themselves in the radically opposing cultures of North and South. William Marsh of Dahlonega, Georgia, enthusiastically answers his state's call for volunteers and marches off to war. While naively searching for glory, he pines for beautiful Mary Stewart, a temptress who rewards his affections with deceit as she obsesses over Jonathon Evans, a rogue and William's sworn enemy. Residing with relatives in the rugged mountains of Northern New Hampshire, William's older brother Thomas struggles against inner demons and regional prejudice, all the while daring to love the intelligent and passionate Stephanie Carroll, whose rabidly anti-Southern uncle schemes to drive them apart. As the nation tears itself apart in ever more bloody clashes, the brothers not only face perils and temptations at home, but also the hazards of distant battlefields, as their destinies thrust them into the ranks of opposing armies - where one wears gray, and the other blue.

George Winston Martin was born in Northern New Hampshire, resided for thirty years in Florida and now calls Western North Carolina home, along with his wife and twin daughters. He is a graduate of Embry-Riddle Aeronautical University of Daytona Beach, Florida. Martin participated in American Civil War reenactments for eighteen years as a member of the Seventh Florida Infantry (recreated). One son of his great-great-grandfather's brother was a private in the First Georgia Volunteer Infantry (C.S.A.), while a second son served in the First New Hampshire Heavy Artillery (U.S.A.). Martin's first book, "I Will Give Them One More Shot: Ramsey's 1st Regiment Georgia Volunteers," was the recipient of the 2012 "Award for Excellence in Research Using the Holdings of An Archives," presented by the Georgia Historical Records Advisory Board (GHRAB).
Loading...
or support indie stores by buying on