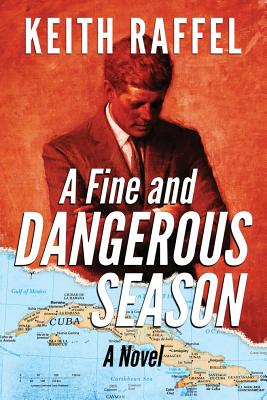 A Fine and Dangerous Season

The phone rings in the California home of businessman Nate Michaels before the sun is up on October 24, 1962. An hour later he's on an Air Force jet to Washington. Michaels hasn't seen or spoken to President Kennedy since they met at Stanford in the fall of 1940, but now JFK needs his help l to defuse the threat posed by Soviet missiles in Cuba. In both the Pentagon and the Kremlin, pro-war generals want a showdown, not a humiliating compromise.

As the world races toward nuclear holocaust during a fine and dangerous autumn, Michaels finds himself spinning in a maelstrom of statecraft, espionage, love, and betrayal.


Praise For A Fine and Dangerous Season…

"A compelling story, written with a sure hand, that keeps you intrigued. But watch out for the gut punches. They come often and unexpectedly. Raffel definitely has his game on." —Steve Berry, New York Times bestselling author of The Columbus Affair and The Jefferson Key


"A rare historical novel—exciting and utterly believable—with Jack Kennedy as you've never seen him. Raffel is a master storyteller. I loved A Fine and Dangerous Season." —Gayle Lynds, New York Times bestselling author of The Book of Spies


"It's been half a century since the Cuban Missile Crisis brought us to the edge of the abyss. It's about time we got a page-turning thriller this good about it. The stakes are incredibly high, the action swift and chilling, the writing sleek and smooth. And the historical characters, from JFK to General Curtis LeMay, leap off the page. It may be fiction, but you'll believe every word of it." —William Martin, New York Times bestselling author of Harvard Yard and The Lincoln Letter


"Raffel takes the reader on a wild ride from Stanford University right before World War II to one of the most dangerous moments of the Cold War. Loved it!" —Rebecca Cantrell, award-winning author of A City of Broken Glass


"A clever and deftly crafted retelling of the Cuban Missile Crisis through the eyes of JFK's old Stanford buddy. Not to be missed." —Robert Gregory Browne, bestselling author of Trial Junkies


"Impressive from beginning to end...A Fine and Dangerous Season is an old-school thriller, more reminiscent of Ambler and Greene than modern-day warriors, which is as it should be, given the setting. Raffel's attention to detail with respect to time, place and circumstance is an added bonus...It is, however, Raffel's ability to deftly switch topical gears that makes this a must-read." —Joe Hartlaub, Bookreporter.com


"Through Raffel's crisp, muscular prose the dialogue unfolds with frightening veracity. In drawing his characters and their voices, Raffel does not stumble." —Sue Dremann, Palo Alto Weekly


"What I find impressive and captivating about this book is the philosophy, the symbolism and the poetry with which Raffel writes. I think this book...is destined to become a movie. I will be first in line to see it. Five stars out of five." —Lynn Farris, Examiner.com