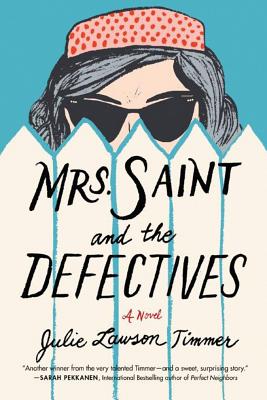 Mrs. Saint and the Defectives

Critically acclaimed author Julie Lawson Timmer returns with a tale of how community can heal the brokenness in all of us.

Markie, a fortysomething divorc e who has suffered a humiliating and very public fall from marital, financial, and professional grace, moves, along with her teenage son, Jesse, to a new town, hoping to lick her wounds in private. But Markie and Jesse are unable to escape the attention of their new neighbor Mrs. Saint, an irascible, elderly New European woman who takes it upon herself, along with her ragtag group of "defectives," to identify and fix the flaws in those around her, whether they want her to or not.

What Markie doesn't realize is that Mrs. Saint has big plans for the divorc e's broken spirit. Soon, the quirky yet endearing woman recruits Markie to join her eccentric community, a world where both hidden truths and hope unite them. But when Mrs. Saint's own secrets threaten to unravel their fragile web of healing, it's up to Markie to mend these wounds and usher in a new era for the "defectives"--one full of second chances and happiness.