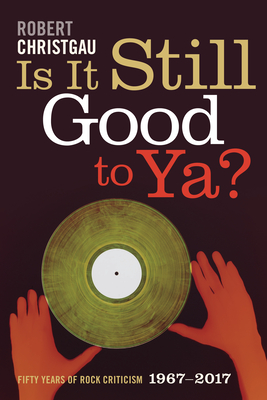 Is It Still Good to Ya?

Is It Still Good to Ya? sums up the career of longtime Village Voice stalwart Robert Christgau, who for half a century has been America's most widely respected rock critic, honoring a music he argues is only more enduring because it's sometimes simple or silly. While compiling historical overviews going back to Dionysus and the gramophone along with artist analyses that range from Louis Armstrong to M.I.A., this definitive collection also explores pop's African roots, response to 9/11, and evolution from the teen music of the '50s to an art form compelled to confront mortality as its heroes pass on. A final section combines searching obituaries of David Bowie, Prince, and Leonard Cohen with awed farewells to Bob Marley and Ornette Coleman.

Robert Christgau currently contributes a weekly record column to Noisey. In addition to four dozen Village Voice selections, Is It Still Good to Ya? collects pieces from the New Yorker, Rolling Stone, Spin, Billboard, and many other venues, including a hundred-word squib from the Dartmouth Alumni Magazine. The most recent of Christgau's six previous books is the 2015 memoir Going into the City: Portrait of the Critic as a Young Man. He taught music history and writing at New York University from 2005 to 2016.
Loading...
or support indie stores by buying on