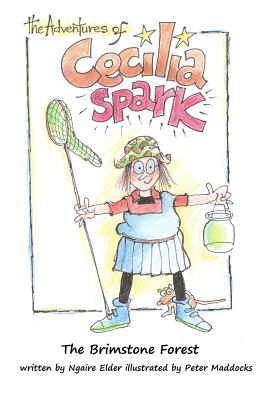 The Adventures of Cecilia Spark (Paperback)

A witch, a dragon and Troglosauruses ... Cecilia's bug hunting adventure in the garden takes an interesting turn. Trapped by a witch, can Cecilia outwit her captor and find her way home? Get ready for the adventure of a lifetime and meet the mesmerizing creatures and characters from the Brimstone Forest. The story is beautifully illustrated throughout, creator Peter Maddocks. His illustrations capture the magic and charm of this spellbinding adventure. Target audience 4-9 year olds and suitable for boys and girls. Superb story to read aloud. This is the first book in the new children's series, THE ADVENTURES OF CECILIA SPARK.

Ngaire Elder, author of The Adventures of Cecilia Spark novels, is a natural storyteller whose love of animals is reflected in her work. Ngaire was born and raised in Glasgow, Scotland, where she spent most of her childhood playing with her brother and her imaginary friends. As a child, she wrote plays, just for fun, but it would be years before her first book was ultimately published. After college and university, Ngaire embarked on a career in the health and safety sector. As a Health and Safety Advisor, she was instrumental in implementing health and safety laws in the workplace. After meeting her husband, she chose a new occupation, and became a full-time wife and mother. In the past decade, Ngaire has managed to balance a writing career and family commitments. She has participated in reading events at primary schools in County Derry, Northern Ireland, Seeley Primary School, Sherwood, and celebrated World Book Day 2014 with the pupils at St Anthony's College, Spain. Ngaire has taught English to young children participating in the Spanish school system's extracurricular activity programme. She has been interviewed extensively by European and American bloggers, and her work has been featured in Indie Author News, British Indie Fiction, Inkspokes, the Coleraine Times, and The Nottingham Post. Ngaire is a passionate supporter of horse rescue, having volunteered in a rescue center in southern Spain. She is actively involved in fund raisers supporting not only local rescue centers, but also for international programs, such as saving the wild mustangs in the Pryor Mountain range in Montana. Ngaire resides in Spain with her husband and four children.
or
Buy Here
Copyright © 2020 American Booksellers Association