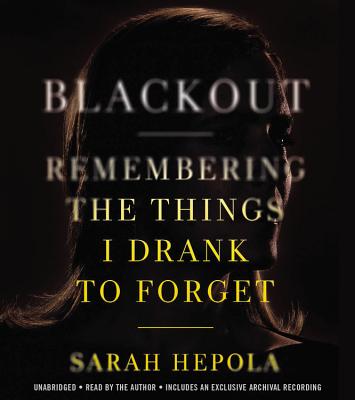 Praise For Blackout: Remembering the Things I Drank to Forget…

"Simply extraordinary. Ms. Hepola's electric prose marks her as a flamingo among this genre's geese. She has direct access to the midnight gods of torch songs, neon signs, tap beer at a reasonable price, cigarettes and untrammeled longing. . . . As a form, addiction memoirs are permanently interesting because they're an excuse to crack open a life. Ms. Hepola's book moves to a top shelf in this arena. . . . It's a win-win. She got a better life. We have this book."—Dwight Garner, The New York Times

"It's hard to think of another memoir that burrows inside an addict's brain like this one does. . . . Her writing lights up the pages, and she infuses the chapters describing her resolute slog toward sobriety with warmth and sprightly humor. [Grade:] A."—Entertainment Weekly

"You don't need to be a reformed problem drinker to appreciate Hepola's gripping memoir about the years she lost to alcohol-and the self she rediscovered once she quit."—People, "Summer's Best Books"

"Hepola unstintingly documents both her addiction's giddy pleasures and its grim tolls. Her account will leave you breathless-and impressed."—People, "Smart New Memoirs"

"Alcohol was the fuel of choice during Hepola's early years as a writer, but after too many nights spent falling down staircases, sleeping with men she didn't remember the next day, and narrowly surviving countless other near disasters, she fought her way clear of addiction and dared to face life without a drink in hand."—O Magazine, "The Season's Best Biographies and Memoirs"

"Wry, spirited. . . . Hepola avoids the tropes of the 'getting sober' confessional and takes us into unexplored territory, revealing what it's like to begin again-and actually like the person you see in the mirror."—MORE Magazine

"Hepola is an enchanting storyteller who writes in a chummy voice. She's that smart, witty friend you want to have dinner with. . . . Like Caroline Knapp's powerful 1996 memoir 'Drinking: A Love Story,' 'Blackout is not preachy or predictable: It's an insightful, subtly inspiring reflection by a woman who came undone and learned the very hard way how to put herself back together."—Washington Post

"A memoir that's good and true is a work of art that stands the literary test of time and also serves a purpose in the present. It mines intimate, personal experiences to raise bigger questions, tell a bigger story, help readers understand themselves, their circumstances, their world. Like the best sermon, the best memoir comforts the disturbed and disturbs the comfortable. This rare bird is the Southern belle of literature: forceful, punctilious, beautiful. BLACKOUT, the debut memoir by Salon editor Sarah Hepola, is one such memoir. It's as lyrically written as a literary novel, as tightly wound as a thriller, as well-researched as a work of investigative journalism, and as impossible to put down as, well, a cold beer on a hot day."—Chicago Tribune

"Hepola refuses to uncomplicate the complicated, one of her memoir's greatest strengths. Yes, we see the familiar recovery story arc-I drank too much, I hit bottom, I found AA-but with it comes a deep dive into the shame, fear and perfectionism that tilt so many women toward defiant self-destruction with the goal of annihilating the confused flawed self to emerge different, better. Invincible. Reflecting on the fantasies that suffused her drinking years, a newly sober Hepola comes to see that they 'all had one thing in common: I was always someone else in them.'"—Los Angeles Times

"Riveting. . . .Tough and street-smart (and a little vulnerable), honest (as far as I can tell), she's sassy and funny, mouthy and flip, hard on herself and without a shred of self-pity."—Minneapolis Star Tribune

"Painfully honest, occasionally tragic and frequently hilarious. . . . Hepola dissects herself with razor-sharp powers of observation and self-awareness, in a voice that is intelligent and remarkably free of self-pity. She's like a good friend spilling secrets you don't really want to hear."—San Antonio Express-News

"I love a recovery memoir, just in general, but Sarah Hepola's 'Blackout: Remembering the Things I Drank to Forget', is an absolute stand-out in the genre. Her writing is superb, but her emotional insight is even greater."—Lenny

"Hepola delves into her own lush life as the merry lit gal about town with unique intensity...In this valiant, gracious work of powerful honesty, Hepola confronts head-on the minefield of self-sabotage that binge drinking caused in her work, relationships, and health before she eventually turned her life around."—Publisher's Weekly

"This is a must-read for recovering addicts; for women susceptible to the glamour of being modern and independent; for anyone who has had a difficult past, and who wants to heal, but who wants mostly to laugh at themselves. Basically, we should all be reading Blackout this summer (and wishing the incredibly smart and candid Hepola was our BFF)."—Bustle

"Alcoholism is a difficult subject to tackle, but Sarah Hepola does so with grace and candor in this memoir about her own struggle with addiction. . . . Captivating and inspiring."—Bookish

"The writing is incredibly smart and maintains a level of intensity you don't often find in long-form memoirs....BLACKOUT is an enthralling interrogation of a life. Even the most banal moments are beautiful, elevated, and resonate across the human experience."—The Rumpus

"The book makes a case for toughness as both a valuable alternate default for women as well as a terrific conduit to self-destruction-just as much as vulnerability, and perhaps even more so. . . . Her style is bright, salty, cutting."—Jezebel

"Revelatory. . . . [Hepola] isn't trying to shock us, though her book is one part gross to four parts engrossing; she is merely painting an honest Portrait Of The Artist As A Young Drunk. And then, without the help of either Prince Charming or Jesus, she saves herself, for no other reason than because it's time."—Flavorwire

"A razor-sharp memoir that reveals the woman behind the wine glass. . . . Modern, raw, and painfully real-and even hilarious. As much as readers will cry over the author's boozy misadventures-bruising falls down marble staircases, grim encounters with strangers in hotel rooms, entire evenings' escapades missing from memory-they will laugh as Hepola laughs at herself, at the wrongheaded logic of the active alcoholic who rationalizes it all as an excuse for one more drink. . . . Hepola moves beyond the analysis of her addiction, making this the story of every woman's fight to be seen for who she really is. . . . Her honesty, and her ultimate success, will inspire anyone who knows a change is needed but thinks it may be impossible. A treasure trove of hard truths mined from a life soaked in booze."—Kirkus Reviews (starred review)

"Her true bravery emerges in this memoir's witty candor. . . . her own sobriety is as funny and fearless as her drinking days. . . . A rollicking and raw account of binge-drinking, blacking out and getting sober."—BookPage

"Bitingly funny, while at the same time its painful, unflinching details about alcoholism make your skin crawl...brash enough to pummel you into the ground, but honest enough to pick you back up after that pummeling...The pairing of disarmingly poignant moments with Hepola's unwavering dedication to telling the complete truth about her story--both the triumphs and the humiliations--makes BLACKOUT one of the most affecting memoirs I've read...Fundamentally, this is a story about overcoming the roadblocks in life that are specifically self-constructed. Hepola's writing is bombastic and graceful at once, making BLACKOUT a must-read."—BookTrib

"The story of a rising star's journey of self-destruction and realization, BLACKOUT is gripping, alternately excruciating and funny, scary and hopeful, and beautifully written. I loved it."—Anne Lamott, author of Small Victories and Traveling Mercies

"Sarah Hepola is my favorite kind of memoirist. She is a reporter with a poet's instincts, an anthropologist of her own soul. BLACKOUT is a book about drinking and eventual sobriety, but it's also an exploration of the fleeting nature of the comfort we all constantly seek--comfort with the self, with others, with the whole maddening, confusing, exhilarating world. What's more, Hepola's ability to bring such precise and evocative life to the blank spaces that were her drinking blackouts is downright stunning in places. I admire this book tremendously."—Meghan Daum, author of The Unspeakable: And Other Subjects of Discussion

"This is a book about welcoming yourself back from a long absence. It's a memoir, but its author is not its main character; she is a new person sprung from the ashes of another one whose alcoholic self-erasure she describes with painful honesty and charming humor. A book about freedom that will help set others free as well."—Walter Kirn, author of Blood Will Out and Up In the Air

"Sarah Hepola's BLACKOUT is the best kind of memoir: fiercely funny, full of hard-won wisdom, marked by a writer with phenomenal gifts of observation and insight. The book engages universal questions--Where do I belong? What fulfills me?--that will engage any reader."—Emily Rapp, author of The Still Point of the Turning World

Sarah Hepola's writing has appeared in the New York Times Magazine, New Republic, Glamour, Slate, Guardian, and Salon, where she was a longtime editor. She has worked as a music critic, travel writer, film reviewer, sex blogger, beauty columnist, and high school English teacher. She lives in Dallas.
Loading...
or
Not Currently Available for Direct Purchase