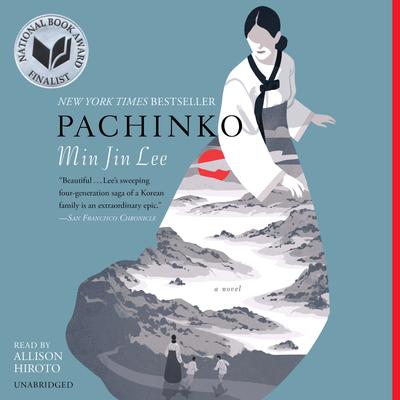 “A father's gentle nature, a mother's sacrifice, a daughter's trust, and a son's determination are the cornerstones of this grand, multilayered saga. Pachinko follows one family through an ever-changing cultural landscape, from 1910 Korea to 1989 Japan. As the bonds of family are put to the test in the harsh realities of their world, Sunja and those she holds dear manage to carve themselves a place to call home with hard work, self sacrifice, and a little kimchi. Through it all is a message about love, faith, and the deep-rooted bonds of family. Min Jin Lee gives us a phenomenal story about one family's struggle that resonates with us today. It will take hold of you and not let go!”
— Jennifer Steele (E), Boswell Book Company, Milwaukee, WI
View the List

“Min Jin Lee has given us a treasure. Pachinko is one of those rare novels that changes your perception of history. The characters are complex and fascinating, and the setting is so beautifully drawn that I felt I was right there with them in Korea, Japan, and the U.S. Lee illuminates the history of Koreans during and after World War II, but, more than that, she brings us a haunting yet beautiful story of family, devotion, lies, politics, and, of course, the game of pachinko.”
— Elaine Petrocelli, Book Passage, Corte Madera, CA
View the List

A New York Times Top Ten Book of the Year and National Book Award finalist, Pachinko is an "extraordinary epic" of four generations of a poor Korean immigrant family as they fight to control their destiny in 20th-century Japan (San Francisco Chronicle).

"There could only be a few winners, and a lot of losers. And yet we played on, because we had hope that we might be the lucky ones."

In the early 1900s, teenaged Sunja, the adored daughter of a crippled fisherman, falls for a wealthy stranger at the seashore near her home in Korea. He promises her the world, but when she discovers she is pregnant--and that her lover is married--she refuses to be bought. Instead, she accepts an offer of marriage from a gentle, sickly minister passing through on his way to Japan. But her decision to abandon her home, and to reject her son's powerful father, sets off a dramatic saga that will echo down through the generations.

Richly told and profoundly moving, Pachinko is a story of love, sacrifice, ambition, and loyalty. From bustling street markets to the halls of Japan's finest universities to the pachinko parlors of the criminal underworld, Lee's complex and passionate characters--strong, stubborn women, devoted sisters and sons, fathers shaken by moral crisis--survive and thrive against the indifferent arc of history.

Min Jin Lee's debut novel, Free Food for Millionaires, was one of the "Top 10 Novels of the Year" for The Times (London), NPR's Fresh Air, and USA Today. Her short fiction has been featured on NPR's Selected Shorts. Her writings have appeared in Condé Nast Traveler, The Times (London), Vogue, Travel+Leisure, Wall Street Journal, New York Times Magazine, and Food & Wine. Her essays and literary criticism have been anthologized widely. She served as a columnist for the Chosun Ilbo, the leading paper of South Korea. She lives in New York with her family.