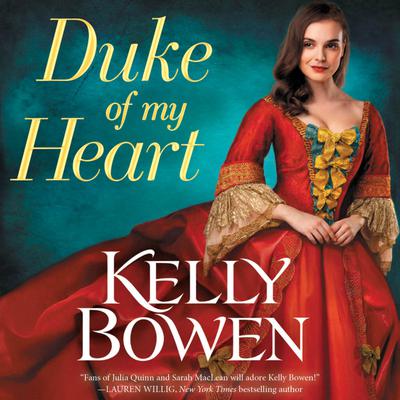 Duke of My Heart (A Season for Scandal) (Digital Audiobook)

Captain Maximus Harcourt, the unconventional tenth Duke of Alderidge, can deal with tropical storms, raging seas, and the fiercest of pirates. But he's returned home from his latest voyage to find a naked earl - quite inconveniently deceased - tied to his missing sister's bed. And he has only one place to turn. Now he's at the mercy of the captivating Miss Ivory Moore of Chegarre & Associates, known throughout London for smoothing over the most dire of scandals.

Miss Moore treats the crisis as though it were no more serious than a cup of spilt tea on an expensive rug. As though this sort of thing happened on the job every day. Max has never in all his life met a woman with such nerve. Her dark eyes are too wide, her mouth is too full, her cheekbones too sharp. Yet together, she's somehow...flawless. It's just like his love for her, imperfect, unexpected - yet absolutely true.

Kelly Bowen grew up in Manitoba, Canada. She attended the University of Manitoba and earned a Master of Science degree in veterinary physiology and endocrinology. But it was Kelly's infatuation with history and a weakness for a good love story that led her down the path of historical romance. When she is not writing, she seizes every opportunity to explore ruins and battlefields.


Currently, Kelly lives in Winnipeg with her husband and two boys, all of whom are wonderfully patient with the writing process. Except, that is, when they need a goalie for street hockey.