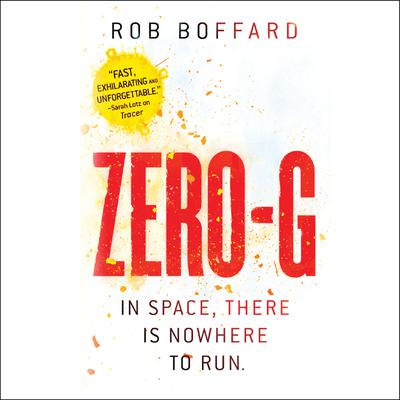 ZERO-G is the nonstop sequel to Rob Boffard's Tracer, a brutal, gripping thrill-ride, where the hero moves like lightning and the consequences for failure are deadly.

The clock is ticking down again for Riley Hale.

She may be the newest member of Outer Earth's law enforcement team, but she feels less in control than ever. A twisted doctor bent on revenge is blackmailing her with a deadly threat. If Riley's to survive, she must follow his orders, and break a dangerous prisoner out of jail. To save her own skin, Riley must go against all her beliefs, and break every law that she's just sworn to protect. Riley's mission will get even tougher when all sectors are thrown into lock-down. A lethal virus has begun to spread through Outer Earth, and it seems little can stop it. If Riley doesn't live long enough to help to find a cure, then the last members of the human race will perish along with her.

The future of humanity hangs in the balance. And time is running out.

Rob Boffard is a South African author who splits his time between London, Vancouver and Johannesburg. He has worked as a journalist for over a decade, and has written articles for publications in more than a dozen countries, including the Guardian and Wired in the UK. Tracer is his first novel.