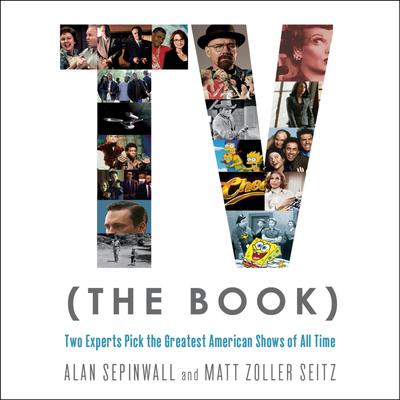 Two Experts Pick the Greatest American Shows of All Time

Is The Wire better than Breaking Bad? Is Cheers better than Seinfeld? What's the best high school show ever made? Why did Moonlighting really fall apart? Was the Arrested Development Netflix season brilliant or terrible?

For twenty years-since they shared a TV column at Tony Soprano's hometown newspaper-critics Alan Sepinwall and Matt Zoller Seitz have been debating these questions and many more, but it all ultimately boils down to this:

What's the greatest TV show ever?

That debate reaches an epic conclusion in TV (THE BOOK). Sepinwall and Seitz have identified and ranked the 100 greatest scripted shows in American TV history. Using a complex, obsessively all-encompassing scoring system, they've created a Pantheon of top TV shows, each accompanied by essays delving into what made these shows great. From vintage classics like The Twilight Zone and I Love Lucy to modern masterpieces like Mad Men and Friday Night Lights, from huge hits like All in the Family and ER to short-lived favorites like Firefly and Freaks and Geeks, TV (THE BOOK) will bring the triumphs of the small screen together in one amazing compendium.

Sepinwall and Seitz's argument has ended. Now it's time for yours to begin!

Alan Sepinwall has been writing about television for close to twenty years. Formerly a TV critic for Newark's Star-Ledger (Tony Soprano's hometown paper), he currently writes the popular blog What's Alan Watching? on HitFix.com. Sepinwall's episode-by-episode approach to reviewing his favorite TV shows "changed the nature of television criticism," according to Slate, which called him "the acknowledged king of the form." He is the author of The Revolution Was Televised: The Cops, Crooks, Slingers and Slayers Who Changed TV Drama Forever (Touchstone, 2012), which the New York Times' Michiko Kakutani named one of her 10 Favorite Books of 2012.


Matt Zoller Seitz is the author of the New York Times bestseller The Wes Anderson Collection (Abrams, 2013). He has been a journalist, critic, and filmmaker for nearly 25 years, and he has been nominated for the Pulitzer Prize in Criticism. He is the TV critic for New York Magazine and Vulture.com, where he writes about current and classic TV and recaps notable series, including Mad Men, Breaking Bad, and Homeland. He is also editor-in-chief and lead film critic of RogerEbert.com.