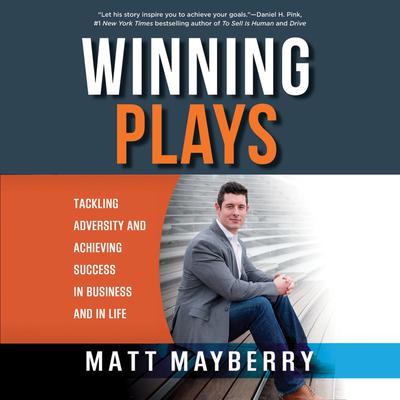 Tackling Adversity and Achieving Success in Business and in Life

No one goes undefeated when playing the game of life. Matt Mayberry is no exception. He's faced setbacks beyond his control and lots more he created himself. But even after conquering addiction, realizing his lifelong dream to play in the NFL, and then having it taken away from him in an instant, he came from behind yet again to achieve more success than ever before.

Sometimes we are knocked down-and even out-by circumstances within or beyond our control. That's life. But these moments can be opportunities to tap into inner strength and start over. By sharing how he treated failure as a way to start over, Matt is now a nationally sought-after speaker and success coach to audiences of more than 100,000 people per year for Fortune 500 companies, NFL and NBA teams, government and nonprofit groups, professional associations, and universities. In WINNING PLAYS, he presents his strategies to survive and thrive in the real world, no matter what gets thrown your way.

Just as no football team can be successful without a solid game plan, you can't be successful without one either. This book is full of Matt's inspirational, motivational, and prescriptive advice, such as: be authentic, create opportunities, power through adversity, reaffirm your goals, rebuild, and many other strategies for developing your own personal game plan to succeed in business and in life.

MATT MAYBERRY is a highly acclaimed keynote speaker and performance strategist. A former Indiana University and Chicago Bears linebacker, Matt is one of the most widely-read columnists for Entrepreneur.com, where he writes on peak performance, overcoming adversity, leadership, and motivation. Matt's work has been featured on ESPN, Forbes, Huffington Post, ABC, NBC, Fox Business, Fox News, Business Insider, and MSN Lifestyle. As the CEO of Matt Mayberry Enterprises, he helps individuals and organizations all over the world to maximize their potential to achieve breakthrough performance.