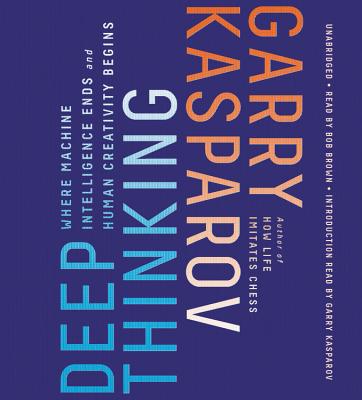 "The great Garry Kasparov takes on the key economic issue of our time: how we can thrive as humans in a world of thinking machines. This important and optimistic book explains what we as humans are uniquely qualified to do. Instead or wringing our hands about robots, we should all read this book and embrace the future."—p.p1 {margin: 0.0px 0.0px 0.0px 0.0px; font: 11.0px Calibri}span.s1 {font-kerning: none}Walter Isaacson, bestselling author of The Innovators

"Garry Kasparov's perspectives on artificial intelligence are borne of personal experience - and despite that, are optimistic, wise and compelling. It's one thing for the giants of Silicon Valley to tell us our future is bright; it is another thing to hear it from the man who squared off with the world's most powerful computer, with the whole world watching, and his very identity at stake."—p.p1 {margin: 0.0px 0.0px 0.0px 0.0px; font: 11.0px Calibri}span.s1 {font-kerning: none}Charles Duhigg, bestselling author of Smarter Faster Better

"Intelligent, absorbing...Thoughtful reading for anyone interested in human and machine cognition and a must for chess fans."
—Kirkus Reviews, starred review

"As Kasparov recounts in arresting detail what it felt like to compete cognitively with a machine, he extrapolates his experience into an optimistic perspective on how computerized intelligence can enhance rather than overwhelm human brainpower, and instead of only eliminating jobs and opportunities, can actually generate them."
—Booklist

"Kasparov includes enough detail to satisfy chess enthusiasts, while providing a thrilling narrative for the casual reader. Deep Thinking delivers a rare balance of analysis and narrative, weaving commentary about technological progress with an inside look at one of the most important chess matches ever played."
—Demis Hassabis, Nature

Mig Greengard is Spokesman and Senior Advisor to Garry Kasparov.
Loading...
or
Not Currently Available for Direct Purchase