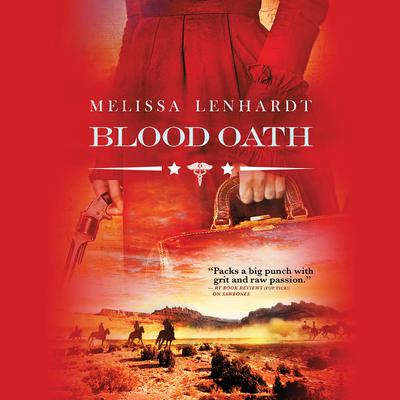 "Kill or be killed historical romance with bandits, Pinkerton agents, bounty hunters, mystery and more. Melissa Lenhardt writes with passion and does not hold anything back." -RT Book Reviews
Laura Elliston and William Kindle are on the run-from the Army and from every miscreant in the West eager to claim the $500 bounty for Laura's capture as their own. But the danger isn't just from those pursuing them. Laura and Kindle each have demons of their own and a past that won't stay dead. Exhausted, scared, scarred, and surrounded by enemies, neither realizes the greatest danger is yet to come.

Blood Oath is the second novel in a gripping historical fiction series.

"Packs a big punch with grit and raw passion. There is mystery, murder, Indians, bounty hunters and intrigue. The women are brave, intelligent and don't take crap from anyone. Lenhardt is a talented, creative writer; she has a grand slam out of the park with Sawbones." -- RT Book Reviews (Top Pick!) 4.5 stars

"Raw, gritty and sometimes graphic, Melissa Lenhardt has crafted a page-turner. In Sawbones, the women are smart, brave and at times 'incorrigible.' The plot twists, unique characters and intriguing story of passion and betrayal make this a book well worth discovering." -- Jane Kirkpatrick, New York Times bestselling author of A Light in the Wilderness

"Absolutely loved it! I couldn't tear myself away from Sawbones. An epic story of love and courage that sweeps from east to west, Sawbones will rip right through you." -- Marci Jefferson, author of Girl on the Golden Coin

"You will fall in love with Catherine, as I did, as she struggles to assert herself in a violent and treacherous world, fighting not only prejudice but evil." -- Sandra Dallas, New York Times bestselling author

Melissa Lenhardt is on the board of directors for the North Dallas chapter of Sisters in Crime, as well as a member of the DFW Writers Workshop. She lives in Texas with her husband and two sons.