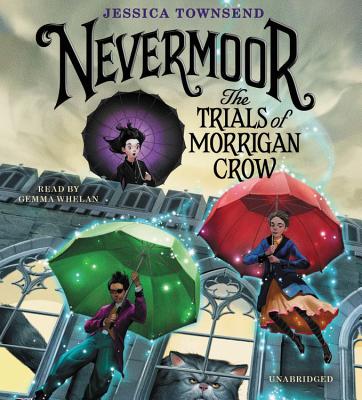 The Trials of Morrigan Crow

A breathtaking, enchanting new series by debut author Jessica Townsend, about a cursed girl who escapes death and finds herself in a magical world--but is then tested beyond her wildest imagination.

Morrigan Crow is cursed. Having been born on Eventide, the unluckiest day for any child to be born, she's blamed for all local misfortunes, from hailstorms to heart attacks--and, worst of all, the curse means that Morrigan is doomed to die at midnight on her eleventh birthday.

But as Morrigan awaits her fate, a strange and remarkable man named Jupiter North appears. Chased by black-smoke hounds and shadowy hunters on horseback, he whisks her away into the safety of a secret, magical city called Nevermoor.

It's then that Morrigan discovers Jupiter has chosen her to contend for a place in the city's most prestigious organization: the Wundrous Society. In order to join, she must compete in four difficult and dangerous trials against hundreds of other children, each with an extraordinary talent that sets them apart--an extraordinary talent that Morrigan insists she does not have. To stay in the safety of Nevermoor for good, Morrigan will need to find a way to pass the tests--or she'll have to leave the city to confront her deadly fate.

Perfect for fans of the Harry Potter series and Neil Gaiman, this fast-paced plot and imaginative world has a fresh new take on magic that will appeal to a new generation of readers.

Praise For Nevermoor: The Trials of Morrigan Crow…

"Jessica Townsend's Nevermoor: The Trials of Morrigan Crow is more than just a spectacular debut. Exciting, charming, and wonderfully imagined, it's the sort of delightful, grand adventure destined to be many a reader's favorite book."—Trenton Lee Stewart, New York Times bestselling author of The Mysterious Benedict Society series and The Secret Keepers

* "Readers, like Morrigan herself, will feel at home in this evocative novel where magic and confidence go hand in hand. An excellent and exciting work."—School Library Journal, starred review

* "Readers will leap into this captivating world brimming with witty characters and unforgettable adventures. A perfect fit for fans of Harry Potter and Percy Jackson."—School Library Connection, starred review

"Townsend knows how to keep the pages turning in this fast-paced story."—Booklist

"The magical elements are well-written and clever...but the core of this novel lies in Morrigan's realization of her own value, of being a person worth attention and affection. A dark, mystical, and emotional look at a girl who has a complex relationship with magic in a sophisticated and lushly described world."—The Bulletin

"Exciting, whimsical, and colorful, this first book in a planned series will be a favorite with readers who love fantasy and adventure."—A Mighty Girl

"Whimsical and captivating....For fans of the Harry Potter and Divergent series."—South Coast Today

Jessica Townsend lives on the Sunshine Coast in Australia, but has lived on and off in London for a few years. She was a copywriter for eight years, and in a previous role, was the editor of a children's wildlife magazine for Steve Irwin's Australia Zoo.
Loading...
or
Not Currently Available for Direct Purchase