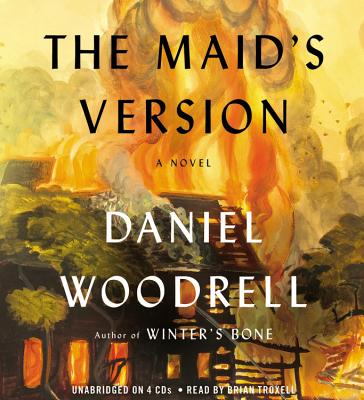 "Daniel Woodrell is the American writer we increasingly look to for the latest urgent news on the American soul. The Maid's Version is a beautiful engine of a novel, whose cogs were not entirely made by human agency, one might hazard to say. As regards the level of reading pleasure, the highest. As regards the level of literary achievement, the highest."--Sebastian Barry

"The Maid's Version is stunning. Daniel Woodrell writes flowing, cataclysmic prose with the irresistible aura of fate about it."--Sam Shepard

"I'd gladly sign a petition to see Mr. Woodrell included on any roll call of America's finest living writers. He conveys a sense of the past with the stringent affection of Katherine Anne Porter; his turns at bedlam humor are worthy of Charles Portis; and his gorgeously tangled prose is all his own."--Sam Sacks, Wall Street Journal

"Woodrell is, like every truly great novelist, a mythmaker with both eyes on the absolute....The Maid's Version is one more resplendent trophy on the shelf of an American master."--William Giraldi, The Daily Beast

"Compact and soulful....The Maid's Version's worth is also in its luminous prose. Woodrell's sentences bristle with finely tuned language and almost biblical rhythms of his characters' speech....Further proof, as if we needed it, that Woodrell is a writer to cherish."--Adam Woog, Seattle Times

"The Maid's Version shows one of America's best writers at the top of his game."--Kevin Nguyen, Grantland

"For readers new to Daniel Woodrell's work, The Maid's Version is a perfect introduction and an invitation to read more. It's a short book...but there are lifetimes captured here....Throughout this remarkable book, Woodrell is an unsentimental narrator of an era that is rendered both kinder and infinitely less forgiving than our own."--Ellah Allfrey, NPR Books

"Woodrell's language echoes melodically with the vernacular of the Ozarks, traces of folk song, the cadences of the Bible. Sometimes he offers, seemingly with little effort, as if from a bottomless repository, pithy similes. This of Alma: "grief has chomped on her like wolves do a calf". At other times, sentences leisurely unspool: "The Missouri river floated sixty yards from the street, and there was a small crotchety tavern on the corner." [Woodrell] belongs within a great, predominantly male tradition of American writing that stretches back to Mark Twain and runs on through Willa Cather, William Faulkner, James Dickey, Larry McMurtry to Cormac McCarthy. From the vantage of their willed exile they have produced, down the generations, some of their country's finest fiction and poetry."—Peter Pierce, the Australian

Five of Daniel Woodrell's published novels were selected as New York Times Notable Books of the Year. Tomato Red won the PEN West Award for the Novel in 1999. Woodrell lives in the Ozarks near the Arkansas line with his wife, Katie Estill.
Loading...
or
Not Currently Available for Direct Purchase