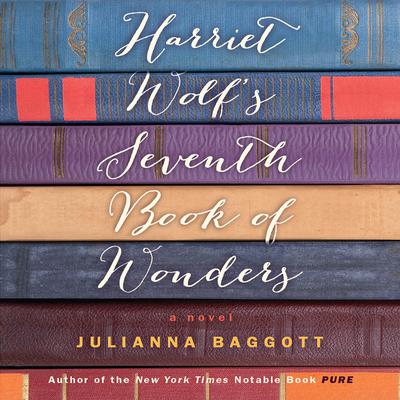 "A mesmerizing tale of star-crossed love and of the dark secrets in a fracturing family . . . This novel is so full of wonders that it leaves you haunted, amazed, and, like every great read, irrevocably changed."-Caroline Leavitt, New York Times bestselling author of Pictures of You The reclusive Harriet Wolf, revered author and family matriarch, has a final confession-a love story. Years after her death, as her family comes together one last time, the mystery of Harriet's life hangs in the balance. Does the truth lie in the rumored final book of the series that made Harriet a world-famous writer, or will her final confession be lost forever?

Harriet Wolf's Seventh Book of Wonders tells the moving story of the unforgettable Wolf women in four distinct voices: the mysterious Harriet, who, until now, has never revealed the secrets of her past; her fiery, overprotective daughter, Eleanor; and her two grown granddaughters-Tilton, the fragile yet exuberant younger sister, who's become a housebound hermit, and Ruth, the older sister, who ran away at sixteen and never looked back. When Eleanor is hospitalized, Ruth decides it's time to do right by a pact she made with Tilton long ago: to return home and save her sister. Meanwhile, Harriet whispers her true life story to the reader. It's a story that spans the entire twentieth century and is filled with mobsters, outcasts, a lonesome lion, and a home for wayward women. It's also a tribute to her lifelong love of the boy she met at the Maryland School for Feeble-minded Children. Harriet Wolf's Seventh Book of Wonders, Julianna Baggott's most sweeping and mesmerizing novel yet, offers a profound meditation on motherhood and sisterhood, as well as on the central importance of stories. It is a novel that affords its characters that rare chance we all long for-the chance to reimagine the stories of our lives while there's still time.

Julianna Baggott's first novel, Girl Talk, was a national bestseller, and has been followed by The Miss America Family, The Madam, and Which Brings Me to You, co-written with Steve Almond, and a Kirkus Reviews Best Book of 2006. Her novel Pure, the first in the trilogy of the same name, was a New York Times Notable Book in 2012. Baggott has also written young adult novels, and is an acclaimed poet and essayist. Her poems have been featured in Best American Poetry, and her essays have appeared in The New York Times Book Review, The Washington Post, The Boston Globe, and Glamour. An associate professor at Florida State University's College of Motion Picture Arts, Baggott lives with her husband and four children, and divides her time between Florida and Massachusetts.