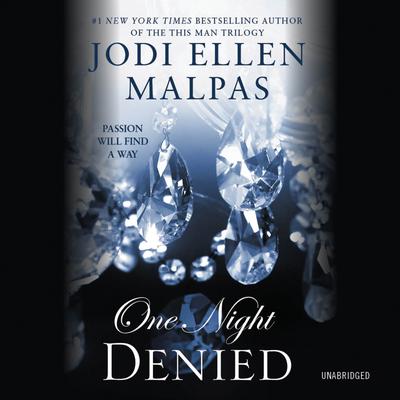 The passion that burned between Livy and M in One Night: Promised may end up destroying them both in this new novel of overwhelming desire and shocking discoveries . . .

He's amazingly wealthy, sinfully gorgeous, and can bring her to heights of pleasure she's never before known. For Livy, there's no turning back. She's determined to be the light in M's dark world. Yet this new life comes with a steep price . . .

M knows that the power he possesses hasn't come without sacrifices-but he won't let Livy be one of them. Though he wants nothing more than to have her in every way, his first duty is to protect her at all costs . . . from his sins, his enemies, and especially himself.

But as their insatiable affair intensifies, the two attract the attention of an obsessive-and dangerous-third party. Discovering new revelations about M that rock her to the core, Livy will have to decide whether he's ruined beyond repair. And he must face his fear that in order to save her, he may have to lose her after all . . .

Look for the stunning conclusion in ONE NIGHT: UNVEILED.

Jodi Ellen Malpas was born and raised in the Midlands town of Northampton, UK, where she lives with her family. Working for the family construction business fulltime and with the prospect of taking it over once her father retired, she tried to ignore the lingering idea of writing a novel until it became impossible. She finally found the time and courage to release her creative streak and in October 2012 self-published This Man as an e-book. She took a chance on a story with some intense characters, notably Mr. Jesse Ward, the Lord of the Manor, and sparked incredible reactions from women all over the world. Two months later, Jodi made the decision to give up her day job to concentrate on her new and very unexpected career in writing.