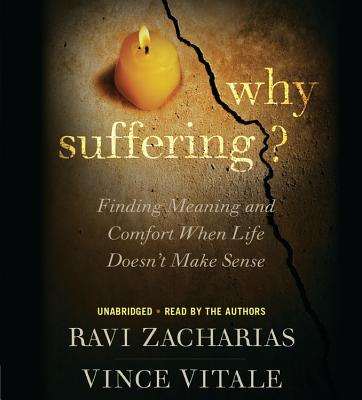 Why would a loving and powerful God allow so much pain and suffering? In Why Suffering? Ravi Zacharias and Vince Vitale carefully walk you through a variety of responses that considered together provide a clear, comprehensive, and convincing answer. Responses like:

Here is a book written with great respect for the complexity of the issue, recognizing that some who read it will be in the trenches of deep suffering themselves and others questioning the very existence of a loving God. Why Suffering? provides an answer to the problem of pain and suffering with emotional sensitivity and intellectual integrity.

Ravi Zacharias is the Founder and President of Ravi Zacharias International Ministries, headquartered in Atlanta, Georgia, with additional offices in Canada, Hong Kong, India, Singapore, the United Kingdom, Austria, South Africa, Spain, and Turkey. Zacharias and his wife, Margie, have three grown children. He is the author of many books, including Can Man Live Without God and Why Jesus?

Dr. Vince Vitale is Director of the Zacharias Institute. He was educated at Princeton University and the University of Oxford, and later taught philosophy of religion as a faculty member at both universities. During his undergraduate studies at Princeton, Dr. Vitale took an unexpected journey that led him to God. Later, while at Oxford, he developed a new response the problem of evil. This response -- termed the Non-Identity Defense -- is discussed in his and Ravi Zacharias's previous book, Why Suffering? He is married to Jo, who also works for RZIM.
or support indie stores by buying on
(This book is on backorder)
Copyright © 2020 American Booksellers Association