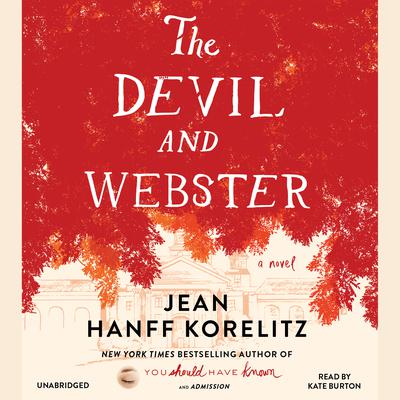 The Devil and Webster (Digital Audiobook)

From the New York Times bestselling author of You Should Have Known and Admission, a twisty new novel about a college president, a baffling student protest, and some of the most hot-button issues on today's college campuses.

Naomi Roth is the first female president of Webster College, a once conservative school now known for producing fired-up, progressive graduates. So Naomi isn't surprised or unduly alarmed when Webster students begin the fall semester with an outdoor encampment around "The Stump"-a traditional campus gathering place for generations of student activists-to protest a popular professor's denial of tenure. A former student radical herself, Naomi admires the protestors' passion, especially when her own daughter, Hannah, joins their ranks.

Then Omar Khayal, a charismatic Palestinian student with a devastating personal history, emerges as the group's leader, and the demonstration begins to consume Naomi's life, destabilizing Webster College from the inside out. As the crisis slips beyond her control, Naomi must take increasingly desperate measures to protect her friends, colleagues, and family from an unknowable adversary.

Touching on some of the most topical and controversial concerns at the heart of our society, this riveting novel examines the fragility that lies behind who we think we are-and what we think we believe.

Jean Hanff Korelitz was born and raised in New York and graduated from Dartmouth College and Clare College, Cambridge. She is the author of one book of poems, The Properties of Breath, and four previous novels, You Should Have Known, A Jury of Her Peers, The Sabbathday River, and The White Rose, as well as a novel for children, Interference Powder. She has also published essays in the anthologies Modern Love and Because I Said So, and in the magazines Vogue, Real Simple, More, Newsweek, Organic Style, (Travel and Leisure (Family), and others. She lives in New York City with her husband (Irish poet Paul Muldoon, poetry editor at The New Yorker and Princeton poetry professor) and two children.