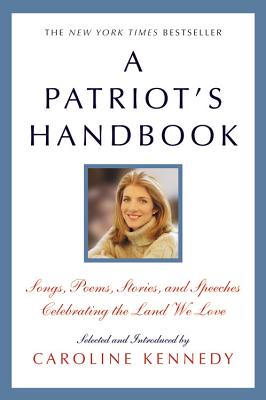 Songs, Poems, Stories, and Speeches Celebrating the Land We Love

Caroline Kennedy shares an inspiring collection of patriotic poems, song lyrics, historical documents, and speeches.The Best-Loved Poems of Jacqueline Kennedy Onassis was a blockbuster success, remaining on the New York Times bestseller list for 15 weeks with more than 500,000 copies in print. Now, Caroline Kennedy shares with readers an assortment of her own favorite American writings. The works collected here--which span centuries and styles--have one thing in common: all are emblematic of our country's patriotism and pride. Caroline Kennedy researched all of the selections included in A Patriot's Handbook, wrote the introduction, and added personal commentary to each section. This elegantly packaged collection is the perfect gift for anyone in search of a reminder of what our country's spirit is made of. "Over the past year we have all thought about what it means to be an American. I realized that I want my own children to know more about the ideals upon which this country was founded and the sacrifices that have been made to pass them on to us. This book is intended to help families explore the foundations of our freedom and to celebrate our heritage." (Caroline Kennedy)

Caroline Kennedy is the author and editor of twelve New York Times bestselling books on American history, politics and poetry. She is also an attorney and diplomat who served as the United States Ambassador to Japan from 2013 to 2017, and the only surviving child of President John F. Kennedy and First Lady Jacqueline Bouvier Kennedy. A graduate of Harvard University and Columbia Law School, Kennedy is active in the efforts to improve New York City public schools and serves as President of the John F. Kennedy Library Foundation.
Loading...
or support indie stores by buying on
(This book is on backorder)