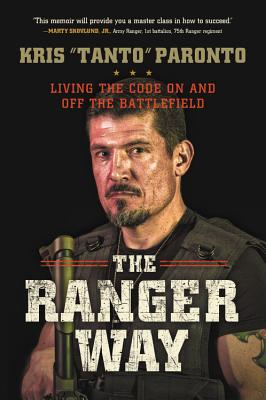 Living the Code On and Off the Battlefield

Discover the USA Today bestselling self-help memoir from a former Army Ranger, a hero of the 2012 Benghazi siege, and the subject of the book and movie 13 Hours, as he shares life-changing lessons of discipline, motivation, success, and peace.

Thousands of people have heard Kris "Tanto" Paronto speak about his experiences in Benghazi on September 11, 2012. But before he was a security contractor, Tanto was a US Army Ranger from 2nd Battalion 75th Ranger Regiment. In The Ranger Way, Tanto shares stories from his training experiences that played a role in his team's heroic response in Benghazi on September 11, 2012. Being a Ranger is, by design, not for everyone, but anyone can use the expectations and techniques of Ranger culture to achieve personal victory. Tanto shows you how to define your mission, set goals that are in alignment with your values, and develop a battle plan that will maximize your chances of success. You will learn why you should never quit and why that is different from never failing. Tanto uses his experiences in Basic and Ranger Training to explore how to deal with mistakes and disappointment like a leader, accept responsibility, and turn every obstacle into an opportunity for growth. You will learn why service and sacrifice will help you succeed-and how the power of humility, strength, faith, and brotherhood will sustain you on the road to accomplishing your mission.

Praise For The Ranger Way: Living the Code On and Off the Battlefield…

"Kris 'Tanto' Paronto took his life of hard-earned experience, which ranges from long days as an aspiring Ranger to the cauldron of combat as a CIA contractor, and boiled it down into invaluable life and leadership principles. Whether you are in the boardroom or on the battlefield, this memoir will provide you a master class in how to succeed no matter how harrowing the situation may be."
—Marty Skovlund, Jr., author of Violence of Action: The Untold Stories of the 75th Ranger Regiment in the War on Terror

"Tanto's book is proof that Rangers lead the way both in and out of the military. This is a must-read for anyone who wants to improve their life."
—Brandon Webb, former Navy SEAL sniper and New York Times bestselling author of The Red Circle

"Kris Paronto epitomizes the courage, leadership, and discipline that selfless Americans who have fought for and defended freedom and liberty have exhibited from the founding of this nation to the present. Calling him my friend is gratifying."
—David A. Clarke Jr., sheriff of Milwaukee County, Wisconsin

Kris "Tanto" Paronto is a former Army Ranger from 2nd Battalion, 75th Ranger Regiment and private security contractor who has deployed to South America, Central America, the Middle East, and North Africa. He is the coauthor, with Mitchell Zuckoff and the five surviving security team members, of the New York Times bestselling book 13 Hours, describing his experiences responding to the 2012 terrorist attack on the U.S. Special Mission in Benghazi, Libya and the author of the USA Today bestselling book The Ranger Way, in which he shares stories from his training experiences as an Army Ranger and how their lessons can be applied to civilians in search of discipline, motivation, success, and peace in their lives. He lives in Omaha, Nebraska.
Loading...
or
Not Currently Available for Direct Purchase