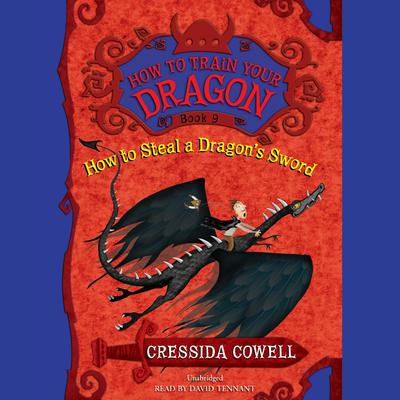 How to Train Your Dragon (Digital Audiobook)

How to Steal a Dragon's Sword

The How to Train Your Dragon series chronicles the adventures and misadventures of Viking underdog Hiccup Horrendous Haddock III and his dragon, Toothless. In Book 9, a dragon rebellion is coming--filled with the meanest, nastiest dragons in the Archipelago. Razor-wings, Tonguetwisters, and Vampire Ghouldeaths are attacking Vikings and seem to be seeking one soul in particular: Hiccup Horrendous Haddock the Third! Only a King can save them...and only a champion with all of the King's Lost Things can be King. In his adventures, Hiccup has collected quite a few "things" himself. But can a scrawny Viking save the entire Archipelago from certain doom? To find out, Hiccup will have to outwit a witch, fight his arch-enemy, and beat back an army of bloodthirsty dragons with just one sword.

Cressida Cowell lives in London with her husband, Simon; their children Maisie, Clementine, and Alexander; and two cats, Lily and Baloo. In addition to translating Hiccup's memoirs, she has also written and illustrated picture books including Hiccup, the Viking Who Was Seasick, Little Bo Peep's Library Book, and That Rabbit Belongs to Emily Brown. Her website is www.cressidacowell.co.uk.