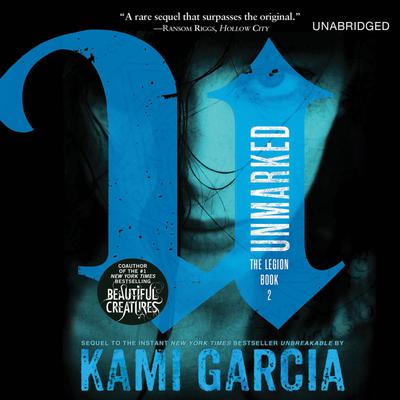 Now Kennedy and the other Legion members-Alara, Priest, Lukas, and Jared-have to hunt him down. As they learn more about the history of the Legion and the Illuminati, Kennedy realizes that the greatest mystery of all does not belong to any secret order, but to her own family. With the clock ticking and the life of someone she loves hanging in the balance, Kennedy has to ask the question she fears most: what is it about her past that has left her Unmarked?

Kami Garcia is the #1 New York Times bestselling coauthor of Beautiful Creatures, which is now a major motion picture. The instant New York Times bestseller Unbreakable was her first solo novel and the first book in the Legion series. Kami lives in Maryland with her family and her dogs, Spike and Oz, named after characters from Buffy the Vampire Slayer. You can find her online at www.kamigarcia.com and on Twitter @kamigarcia.