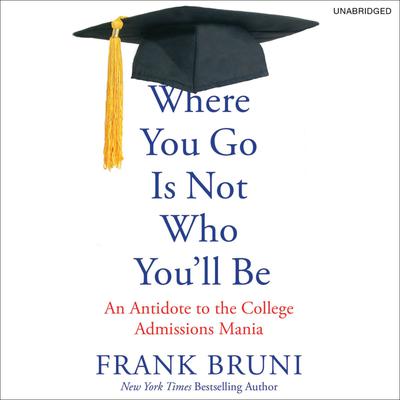 Where You Go Is Not Who You'll Be (Digital Audiobook)

An Antidote to the College Admissions Mania

Over the last few decades, Americans have turned college admissions into a terrifying and occasionally devastating process, preceded by test prep, tutors, all sorts of stratagems, all kinds of rankings, and a conviction among too many young people that their futures will be determined and their worth established by which schools say yes and which say no.

That belief is wrong. It's cruel. And in WHERE YOU GO IS NOT WHO YOU'LL BE, Frank Bruni explains why, giving students and their parents a new perspective on this brutal, deeply flawed competition and a path out of the anxiety that it provokes.

Bruni, a bestselling author and a columnist for the New York Times, shows that the Ivy League has no monopoly on corner offices, governors' mansions, or the most prestigious academic and scientific grants. Through statistics, surveys, and the stories of hugely successful people who didn't attend the most exclusive schools, he demonstrates that many kinds of colleges-large public universities, tiny hideaways in the hinterlands-serve as ideal springboards. And he illuminates how to make the most of them. What matters in the end are a student's efforts in and out of the classroom, not the gleam of his or her diploma.

Where you go isn't who you'll be. Americans need to hear that-and this indispensable manifesto says it with eloquence and respect for the real promise of higher education.

FRANK BRUNI was named an Op-Ed columnist for The New York Times in June 2011. Before that, he was the paper's chief restaurant critic for five and a half years. Since joining the Times in 1995, he has also been the Rome bureau chief, a White House correspondent, the lead reporter covering George W. Bush's 2000 presidential campaign, and a staff writer for the The New York Times Sunday Magazine. He was a finalist for the Pulitzer Prize in feature writing for his work before the Times at the Detroit Free Press.