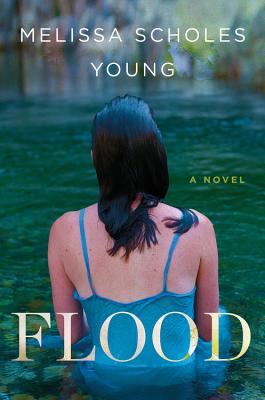 A sparkling debut set in Mark Twain's boyhood town, Flood is a story of what it means to be lost . . . and found.

Laura Brooks fled her hometown of Hannibal, Missouri, ten years ago after a historic flood and personal heartbreak. Now she's returned unannounced, and her family and friends don't know what to make of it. She says she's just home for a brief visit and her high-school reunion, but she's carrying too much luggage for that: literal and metaphorical. Soon Laura is embroiled in small-town affairs--the contentious divorce of her rowdy best friend Rose; the campaign of her twelve-year-old godson, Bobby, to become the town's official Tom Sawyer; and the renewed interest of the man Laura once thought she'd marry, Sammy McGuire.

Leaving town when she was eighteen had been Laura's only option. She feared a stifling existence in a town ruled by its past, its mythological devotion to Mark Twain, and the economic and racial divide that runs as deep as the Mississippi River. She can't forget that fateful Fourth of July when the levees broke or the decisions that still haunt her. Now as the Mississippi rises again, a deep wound threatens to reopen, and Laura must decide if running away once more might be the best way to save herself.

Melissa Scholes Young is an award-winning author from Hannibal, Missouri, which she proudly claims as her hometown. Her writing has appeared in the Atlantic, Washington Post, Narrative, Ploughshares, Poets & Writers, and other literary journals. She teaches at American University in Washington, D.C. FLOOD is her first novel.

Praise For Flood: A Novel…

Melissa Scholes Young is immensely talented. Her eye is clear and her powers are on high. I read Flood with admiration and growing excitement. I so strongly recommend her. Read her, now!—Luis Alberto Urrea, author of Into the Beautiful North and The Water Museum


Melissa Scholes Young's first novel delivers two unforgettable characters: the exhausted but not down-for-the-count Laura Brooks running back to her hometown of Hannibal, Missouri and the Mississippi River - both looking to climb out of their confines and willing to become displaced in the process. Fans of Mark Twain's beloved work will recognize Flood's conflicted characters and endearing contradictions. Like Twain, Laura Brooks tells the truth, mainly...—Dr. Cindy Lovell, Executive Director, Mark Twain House & Museum


Melissa Scholes Young knows how to tell a story, one that captivates and charms. She also knows the land and the heart's attachment to it. Flood is a novel about coming home, which in this case, is Hannibal, Missouri, on the banks of the Mississippi River, the land of Mark Twain and his unforgettable characters, Tom Sawyer and Huck Finn. This novel's take on the question of whether to 'light out for the territory' is a wonderful read, one that will make you think about what it means to call a place home.—Lee Martin, author of The Bright Forever and Late One Night

Flood is a beautifully written novel that explores perennial questions of identity and belonging. I say perennial not because the novel beats a well-worth path, but because these questions are existential and urgent. Scholes Young is a thoughtful realist who creates a rich fictive dream without sacrificing character and voice. In Flood, she avoids the pitfalls of rural caricature by refusing the hyperbolic dialect and false cadences common in contemporary fiction that privileges place. Her characters come to life through patient accumulation not grotesque gesture. The prose is sharp, full of momentum, and yet restrained. There is no false nostalgia here, only complexity.—Stephanie Grant, author of The Passion of Alice and Map of Ireland

Melissa Scholes Young's debut novel Flood bubbles up from the home ground of Mark Twain. Those storied banks of the Mississippi crest anew with all the humor and hunger of Hannibal's current haves and have-nots-and this time it's women in the leading roles, YAY! The self-exiled Laura Brooks is running retrograde, returning home to tightrope walk a personal levee of luggage and love among family and friends. Down here the water's thick as the blood, and Flood's pages will swell and rush over you with their deep yearnings. This is fertile ground indeed, and Miss Scholes Young is brimming with Twain's loam and legacy.—Marc Nieson, author of Schoolhouse: Lessons on Love and Landscape

Flood is character-driven fiction that appeals on both a gut and an emotional level. Melissa Scholes Young tackles difficult situations and never veers into cliché. Her endings are sublime. And her characters are as believable as anybody's friends and neighbors. I marvel at her poetic language, her accumulation of details, and her uncanny ability to key on exactly what it is that makes a story. She has admirable range and creates real people with depth, plus plot points that stick in the heart and mind.
—Richard Peabody, author of The Richard Peabody Reader, editor and publisher of Gargoyle Magazine and Paycock Press

A dazzling work as wide and turbulent as the Mississippi itself. Flood delivers a seductive sense of belonging and intimacy before ultimately breaking your heart. Young takes on big themes of identity, family, and the idea of home with a riveting mix of honesty and enchantment.—Aline Ohanesian, author of Orhan's Inheritance

Melissa Scholes Young's charming, energetic debut brings to life a town steeped in and hindered by its own rich history. Huck Finn and Becky Thatcher are still alive and well in modern day Hannibal, Missouri, and the rising Mississippi River provides the mercurial backdrop for a young woman's quest to determine whether home is ultimately where she belongs.—Susan Coll, author of The Stager

Flood is an absolute delight. Melissa Sholes Young captures a time, place and town with authenticity, humor, and an obvious love for her characters. A great debut by a wonderful new voice!—Rebecca Barry, bestselling author of Later, at the Bar


This debut is a wonderful story of home, hope, and the ties that bind us to family.—Publishers Weekly


After running from her hometown of Hannibal, MO, Laura Brooks has returned, broken and depressed from losing her job and a pregnancy. Not much has changed at home: the town faces yet another torrential flood that could ruin families; her mother and brother live in the same rundown trailer; and her best friend Rose is still wild and irresponsible. And then there's Sammy, Laura's old love whom she left without a word when the levees broke and the town flooded ten years ago. Facing embarrassment and criticism, Laura struggles to put her life back on track even while she's pulled into Rose's divorce battle, her brother's drug habit, and Sammy's rekindled interest in her. A new job and increasing responsibilities might keep Laura in town, but will the memories of their old love and her dreams of something better get in the way of rebuilding her life in Hannibal? Young will leave readers thinking about their own flood of memories in this debut novel. Perfect for those who liked Tommy Lee ­Tyson's They Tell Me of a Home and H.P. Munrow's Saving Grace.—Library Journal


Flood is a story of home and place, but it's also a story of class and difference, and at the same time it's a story of love: familial love, the love between friends, romantic love, and even the love of literature itself. That Melissa Scholes Young is able to so deftly weave these together-in evocative sentences and heartbreaking scenes-is testament to her remarkable ability.—Rumaan Alam, author of Rich and Pretty and That Kind of Mother

Scholes Young's pursuit [in Flood] is classic and eternal: 'the human heart in conflict with itself,' in William Faulkner's mighty phrase. In Scholes Young's hands, the conflict is waged with fierce consummate compassion and, finally, apocalyptic and enigmatic grace.—Ron Powers, Pulitzer Prize winning author, White Town Drowsing: Journeys to Hannibal, Dangerous Water: A Biography of the Boy Who Became Mark Twain, and Mark Twain: A Life

T. S. Eliot said of Mark Twain's writing of Huckleberry Finn that the book would give readers what each reader was capable of taking from it, and that Twain may have written a much better book than he realized. Eliot was not excusing Mark Twain: What Eliot wrote is what genuine wisdom looks like on the printed page. The same could be said of Melissa Young and Flood . . . Flood reflects America's rural-urban divide, racism, empty-headed faith, willful ignorance, wheel-spinning, and marveling at distracting fireworks instead of the vast universe looming behind them. It's more than a hillbilly elegy.—Kevin Mac Donnell, Mark Twain Forum

Flood is my favorite kind of novel - characters you care deeply about from the moment you meet them in a story of class, family, and love that is both timeless and of the moment. With a feminist twist Melissa Scholes Young has given us a sparkling addition to literary works inspired by Mark Twain - a modern classic to be read again and again.—Andrea Jarrell, author of I'm the One Who Got Away
or
Not Currently Available for Direct Purchase
Copyright © 2020 American Booksellers Association