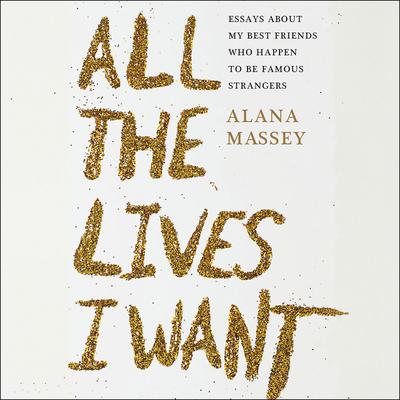 All the Lives I Want (Digital Audiobook)

Essays About My Best Friends Who Happen to Be Famous Strangers

"Alana Massey's prose is to brutal honesty what a mandolin is to a butter knife: she's sharper; she slices thinner; she shows the cross-section of a truth so deftly--so powerfully and cannily--it's hard to look away, and hard not to feel that something has shifted in you for having read her." -- Leslie Jamison, New York Times bestselling author of The Empathy Exams From columnist and critic Alana Massey, a collection of essays examining the intersection of the personal with pop culture through the lives of pivotal female figures--from Sylvia Plath to Britney Spears--in the spirit of Chuck Klosterman, with the heart of a true fan. Mixing Didion's affected cool with moments of giddy celebrity worship, Massey examines the lives of the women who reflect our greatest aspirations and darkest fears back onto us. These essays are personal without being confessional and clever in a way that invites readers into the joke. A cultural critique and a finely wrought fan letter, interwoven with stories that are achingly personal, All the Lives I Want is also an exploration of mental illness, the sex industry, and the dangers of loving too hard. But it is, above all, a paean to the celebrities who have shaped a generation of women--from Scarlett Johansson to Amber Rose, Lil' Kim, Anjelica Huston, Lana Del Rey, Anna Nicole Smith and many more. These reflections aim to reimagine these women's legacies, and in the process, teach us new ways of forgiving ourselves.

Alana Massey is a writer specializing in culture, gender, and her own existential despair. She is a columnist at New York Magazine's The Cut, formerly of Matter and Pacific Standard where stories like "Against Chill" and "The 30,000 Word Job Application" have garnered nationwide media attention. Her essays have appeared in The Washington Post, The LA Review of Books, BuzzFeed, The New Republic,The New Inquiry, Jezebel, Deadspin, The Toast, The Hairpin, Dame Magazine, Tits & Sass, xoJane, and Nerve. She has contributed original reporting in Truth Out, The Daily Dot, The Baffler, and Religion Dispatches. Her work has been featured on the BBC, CBC Radio, NPR, LongReads, Longform, and is frequently cited in stories about women and mental health, sex work, and religion. She holds a BA in History from New York University and an MA in Religion from Yale Divinity School. She lives in Brooklyn, NY.