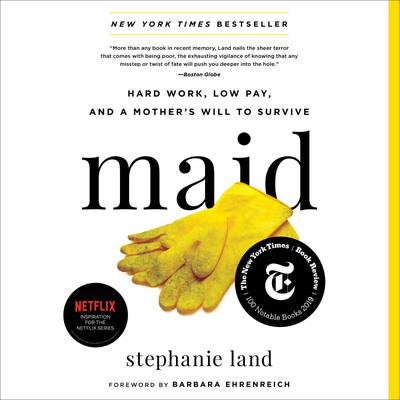 NEW YORK TIMES BESTSELLER AND INSPIRATION FOR THE NETFLIX LIMITED SERIES, HAILED BY ROLLING STONE AS "A GREAT ONE."
"A single mother's personal, unflinching look at America's class divide, a description of the tightrope many families walk just to get by, and a reminder of the dignity of all work."


At 28, Stephanie Land's dreams of attending a university and becoming a writer quickly dissolved when a summer fling turned into an unplanned pregnancy. Before long, she found herself a single mother, scraping by as a housekeeper to make ends meet.

Maid is an emotionally raw, masterful account of Stephanie's years spent in service to upper middle class America as a "nameless ghost" who quietly shared in her clients' triumphs, tragedies, and deepest secrets. Driven to carve out a better life for her family, she cleaned by day and took online classes by night, writing relentlessly as she worked toward earning a college degree. She wrote of the true stories that weren't being told: of living on food stamps and WIC coupons, of government programs that barely provided housing, of aloof government employees who shamed her for receiving what little assistance she did. Above all else, she wrote about pursuing the myth of the American Dream from the poverty line, all the while slashing through deep-rooted stigmas of the working poor.

Maid is Stephanie's story, but it's not hers alone. It is an inspiring testament to the courage, determination, and ultimate strength of the human spirit.

Journalist Stephanie Land's work has been featured in The New York Times, The Washington Post, The Guardian, Vox, Salon, and many other outlets. She focuses on social and economic justice as a writing fellow through both the Center for Community Change and the Economic Hardship Reporting Project. She lives with her two daughters and newlywed husband in Missoula, Montana.