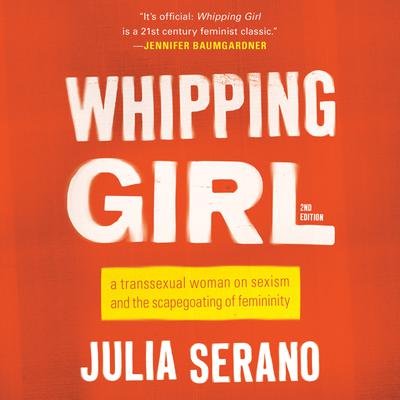 “A foundational text for anyone hoping to understand transgender politics and culture in the U.S. today.” —NPR
Named as one of 100 Best Non-Fiction Books of All Time by Ms. Magazine

Julia Serano shares her experiences and insights—both pre- and post-transition—to reveal the ways in which fear, suspicion, and dismissiveness toward femininity shape our societal attitudes toward trans women, as well as gender and sexuality as a whole.

Serano's well-honed arguments and pioneering advocacy stem from her ability to bridge the gap between the often-disparate biological and social perspectives on gender. In this provocative manifesto, she exposes how deep-rooted the cultural belief is that femininity is frivolous, weak, and passive.

In addition to debunking popular misconceptions about being transgender, Serano makes the case that today's feminists and transgender activists must work to embrace and empower femininity—in all of its wondrous forms.

Julia Serano is an Oakland, California-based writer, performer, activist, and biologist. She is best known for her 2007 book, Whipping Girl: A Transsexual Woman on Sexism and the Scapegoating of Femininity, which garnered rave reviews-The Advocate placed it on their list of "Best Non-Fiction Transgender Books," and readers of Ms. Magazine ranked it #16 on their list of the "100 Best Non-Fiction Books of All Time." Her second full-length book, Excluded: Making Feminist and Queer Movements More Inclusive, was a Publishing Triangle finalist for the 2013 Judy Grahn Award for Lesbian Nonfiction. Julia's writings have appeared in over a dozen anthologies, and in magazines and news outlets such as the Guardian, the Daily Beast, AlterNet.org, The Advocate, Out, Bitch, and Ms. Magazine.


Serano's understanding of biology (she has a PhD in Biochemistry from Columbia University and worked as a researcher at UC Berkeley for seventeen years) along with her life experiences as a transgender woman give her a unique perspective on gender and sexism, and her writings have been used as teaching materials in gender and queer studies, sociology, and psychology courses across North America. Visit her website at juliaserano.com.