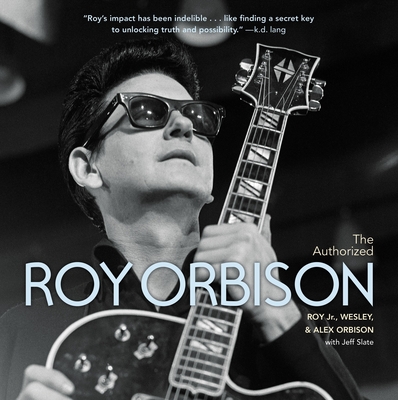 For the first time, legendary performer Roy Orbison's story as one of the most beloved rock legends will be revealed through family accounts and records.
p.p1 {margin: 0.0px 0.0px 0.0px 0.0px; text-indent: 36.0px; font: 12.0px Geneva} p.p2 {margin: 0.0px 0.0px 0.0px 0.0px; font: 12.0px Geneva} span.Apple-tab-span {white-space:pre} Roy Orbison is a rock and roll icon almost without peer. He came of age as an artist on the venerable Sun Records label; toured with The Beatles; had massive hits in the 1960s, 1970s, and 1980s; invented the black-clad, sunglasses-wearing image of the rock star; and reinvented the art of songwriting many times over. He is a member of the Rock & Roll and Songwriters Halls of Fame, a recipient of the Musicians Hall of Fame's inaugural Iconic Riff Award, and the winner of multiple GRAMMY® awards. He is known the world over for hits like "Blue Bayou," "You Got It," and "Oh, Pretty Woman" and was a member of the band that inspired the term "supergroup"-the Traveling Wilburys, with Bob Dylan, George Harrison, Jeff Lynne, and Tom Petty. Despite these and countless other accolades, the story of Roy Orbison's life is virtually unknown to his millions of fans around the world. Now, for the first time ever, the Orbison Estate, headed by Roy's sons, Wesley, Roy Jr., and Alex Orbison, has set out to set the record straight.

The Authorized Roy Orbison tells the epic tale of a West Texas boy, drawn to the guitar at age six, whose monumental global career successes were matched at nearly every turn by extraordinary personal tragedies, including the loss of his first wife in a motorcycle accident and his two oldest sons in a fire. It's a story of the intense highs and severe lows that make up the mountain range of Roy Orbison's career; one that touched four decades and ended abruptly at perhaps its highest peak, when he passed away at the age of fifty-two on December 6, 1988.

Filled with hundreds of photographs, many never before seen, gathered from across the globe and uncovered from deep within the Orbison Vault, The Authorized Roy Orbison shows Roy Orbison as a young child and follows him all the way through to the peak of his stardom and up to his tragic end. Wesley, Roy Jr., and Alex Orbison-Roy's Boys-have left no stone unturned in order to illustrate the people, places, things, and events that forged their father, the man behind those famous sunglasses.

p.p1 {margin: 0.0px 0.0px 0.0px 0.0px; font: 12.0px Geneva} p.p2 {margin: 0.0px 0.0px 0.0px 0.0px; text-indent: 36.0px; font: 12.0px Geneva} Wesley, Roy Jr., and Alex Orbison work tirelessly to protect and further their father's legacy. Wesley, the eldest, is a seasoned songwriter and guitar player. His song "The Only One" (co-written with Craig Wiseman) appears on Roy Orbison's multi-platinum album Mystery Girl. Roy Jr. is a singer and guitar player who works out of his own professional recording studio, the Pretty Woman Studio. He enjoys spending time with his beautiful bride and their son, Roy Orbison III. Alex, a drummer by trade, began his career in music publishing at the age of seventeen. As co-president of Still Working Music, along with his brother Roy, Alex has overseen several Top Ten songs and Number One hits. All three brothers reside with their families in Nashville.

Jeff Slate is a songwriter and music journalist who regularly contributes to Esquire, Rolling Stone, and other publications. A lifelong fan of Roy Orbison, he recently contributed liner notes to The Ultimate Roy Orbison and the fiftieth-anniversary reissue of The Beatles' Sgt. Pepper's Lonely Hearts Club Band. He and his partner, Lynn, reside in New York City with their children.


Praise For The Authorized Roy Orbison…

"A just-released biography by Orbison's sons Roy Jr., Wesley and Alex, titled The Authorized Roy Orbison, peels away the layers of the singer's mystique to present a complete picture of the man, a loving husband and father as well as a musical kingpin. The three siblings, who affectionately refer to themselves as "Roy's boys," and music journalist Jeff Slate chronicle Orbison's career from his Texas boyhood to recording stardom and the tragic end to his life at the much-too-young age of 52. More than 300 photographs, many of them never before published, dot the book and add the necessary context to the Orbison saga."
—Rolling Stone Country

"Roy's impact has been indelible... like finding a secret key to unlocking truth and possibility."—k.d. lang

"Roy Orbison remains a compelling figure in the long line of sounds from Texas. Roy dreamed as big as the Lone Star State and sang even bigger. And this book reminds us of the near incalculable impact he continues to have on music to the present day."—Billy F Gibbons, guitarist and lead vocalist, ZZ TOP

"I met Roy in 1980. He opened for us [Eagles] in San Francisco. We should have opened for him. This is a great book by his sons -- a MUST read."—Joe Walsh, guitarist and vocalist, the EAGLES

"From his early days through the Sun and Monument Records years, the '70s revival, Wilburys, et al, [THE AUTHORIZED ROY ORBISON] offers plenty of good old story-telling in a breezy, readable tone that'll make you like the man even more than you already do."—Mojo Magazine

"THE AUTHORIZED ROY ORBISON not only remembers the legendary American singer-songwriter, but offers a truly unique look-behind-the-scenes at a talented, humble man who became a voice for the ages. Roy Orbison had songs that charted in five consecutive decades, and his accolades continue after his death. This book, co-authored by Roy Orbison, Jr., Wesley Orbison and Alex Orbison with Jeff Slate, chronicles the making of Roy Orbison - his personal life and his celebrity."—Tennessean
or
Buy Here
Copyright © 2020 American Booksellers Association