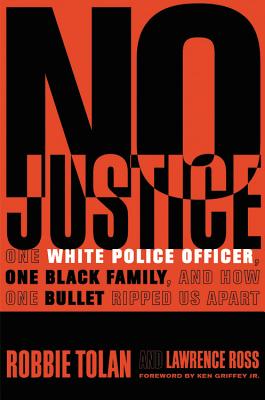 One White Police Officer, One Black Family, and How One Bullet Ripped Us Apart

The harrowing true story of Robbie Tolan, a young black man who was shot in the chest by a white police officer . . . in his own driveway.
NO JUSTICE is the harrowing story of Robbie Tolan, who early on one New Year's Eve morning, found himself being rushed to the hospital. A white police officer had shot him in the chest after mistakenly accusing him of stealing his own car...while in his own driveway.
In a journey that took nearly a decade, Tolan and his family saw his case go before the United States Supreme Court in a groundbreaking decision, while Tolan struggled with how to put his life back together. Holding him together through this journey was the strength of his mother and father, his faith in God, and an impenetrable belief that he deserved justice like any other American who'd been wronged.
NO JUSTICE is the story about what happened after the cameras and social media protests went away. Robbie Tolan was left with the physical and mental devastation from having his body violated by someone who was supposed to serve and protect him. His story reminds us that police brutality is not a theoretical talking point in a larger nationwide argument. This story is about Robbie Tolan courageously picking up the pieces of his life, even as he fights for justice for all.

Robbie Tolan has spent the past decade fighting for the rights of black victims seeking justice when dealing with police officers and the judicial system. His law-making case, Tolan v. Cotton, has set the precedent in the way judges are allowed to grant police officers qualified immunity. Since its ruling in 2014, Tolan's case has been cited in and helped thousands of cases involving police brutality. Tolan's foundation, Project 1231, is dedicated to making sure that victims of police brutality get the support they need. He currently lives in Houston.

Lawrence Ross is a lecturer, writer, filmmaker, social media expert, and bestselling author of The Divine Nine: The History of African American Fraternities and Sororities and Blackballed: The Black and White Politics of Race on America's Campuses. He's written regular pieces for CNN.com, the Grio, the Root, Ebony.com, and USA Today. He lives in Los Angeles with his wife April and son Langston.
Loading...
or
Not Currently Available for Direct Purchase