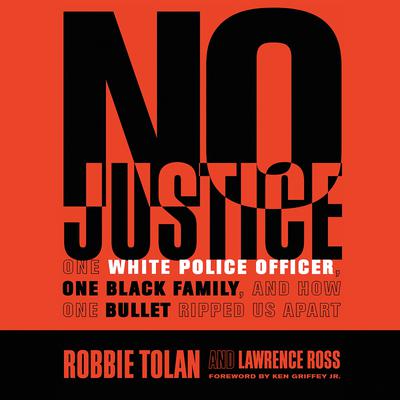 One White Police Officer, One Black Family, and How One Bullet Ripped Us Apart

The harrowing true story of Robbie Tolan, a young black man who was shot in the chest by a white police officer . . . in his own driveway.
NO JUSTICE is the harrowing story of Robbie Tolan, who early on one New Year's Eve morning, found himself being rushed to the hospital. A white police officer had shot him in the chest after mistakenly accusing him of stealing his own car...while in his own driveway.
In a journey that took nearly a decade, Tolan and his family saw his case go before the United States Supreme Court in a groundbreaking decision, while Tolan struggled with how to put his life back together. Holding him together through this journey was the strength of his mother and father, his faith in God, and an impenetrable belief that he deserved justice like any other American who'd been wronged.
NO JUSTICE is the story about what happened after the cameras and social media protests went away. Robbie Tolan was left with the physical and mental devastation from having his body violated by someone who was supposed to serve and protect him. His story reminds us that police brutality is not a theoretical talking point in a larger nationwide argument. This story is about Robbie Tolan courageously picking up the pieces of his life, even as he fights for justice for all.
Loading...