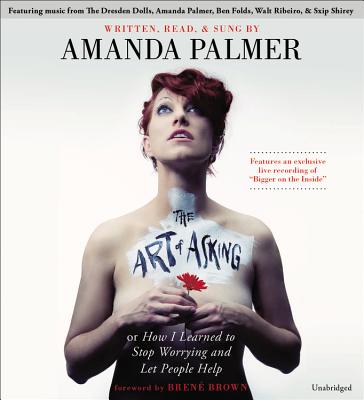 Even while Amanda is both celebrated and attacked for her fearlessness in asking for help, she finds that there are important things she cannot ask for-as a musician, as a friend, and as a wife. She learns that she isn't alone in this, that so many people are afraid to ask for help, and it paralyzes their lives and relationships. In this groundbreaking book, she explores these barriers in her own life and in the lives of those around her, and discovers the emotional, philosophical, and practical aspects of THE ART OF ASKING.

Part manifesto, part revelation, this is the story of an artist struggling with the new rules of exchange in the twenty-first century, both on and off the Internet. THE ART OF ASKING will inspire readers to rethink their own ideas about asking, giving, art, and love.

Amanda Palmer rose to fame as the lead singer, pianist, and lyricist for the acclaimed band The Dresden Dolls, and performs as a solo artist as well as collaborating with artists including Jonathan Richman and her husband, author Neil Gaiman.
Loading...
or
Not Currently Available for Direct Purchase