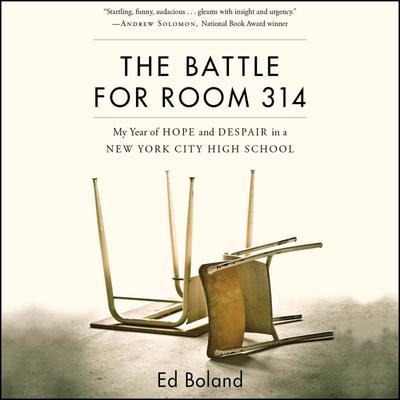 The Battle for Room 314 (Digital Audiobook)

In this insightfully honest and moving memoir about the realities of teaching in an inner-city school, Ed Boland "smashes the dangerous myth of the hero-teacher [and] shows us how high the stakes are for our most vulnerable students" (Piper Kerman, author of Orange is the New Black).
In a fit of idealism, Ed Boland left a twenty-year career as a non-profit executive to teach in a tough New York City public high school. But his hopes quickly collided headlong with the appalling reality of his students' lives and a hobbled education system unable to help them. Freddy runs a drug ring for his incarcerated brother; Nee-cole is homeschooled on the subway by her brilliant homeless mother; Byron's Ivy League dream is dashed because he is undocumented.
In the end, Boland isn't hoisted on his students' shoulders and no one passes AP anything. This is no urban fairy tale of at-risk kids saved by a Hollywood hero, but a searing indictment of schools that claim to be progressive but still fail their students.
Told with compassion, humor, and a keen eye, Boland's story is sure to ignite debate about the future of American education and attempts to reform it.
Loading...