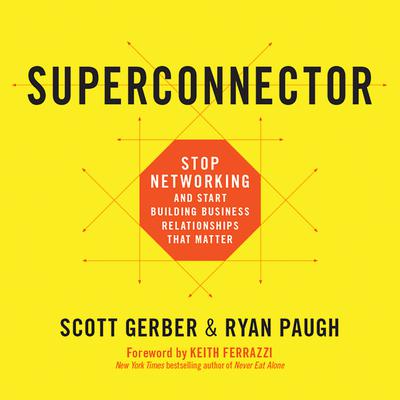 Abandon the networking-for-networking's-sake mentality in favor of a more powerful and effective approach to creating and enhancing connections.

STOP NETWORKING. Seriously, stop doing it. Now. It is time to ditch the old networking-for networking's-sake mentality in favor of a more powerful and effective approach to creating and enhancing connections. In Superconnector, Scott Gerber and Ryan Paugh reveal a new category of professionals born out of the social media era: highly valuable community-builders who make things happen through their keen understanding and utilization of social capital. Superconnectors understand the power of relationship-building, problem-solve by connecting the dots at high levels, and purposefully cause different worlds and communities to interact with the intention of creating mutual value.

How can you become a Superconnector? Gerber and Paugh share instructive anecdotes from a who's who roster of high achievers, revealing how to systematically manage a professional community and maximize its value. Of utmost importance is practicing Habitual Generosity, acting on the knowledge that your greatest returns come when you least expect them, and that by putting others' needs first the good karma will flow back to you tenfold. Gerber and Paugh also explore winning strategies such as The Art of Selectivity, a well-honed ability to define which relationships matter most for you and decide how you will maintain them over time. Full of helpful advice on how to communicate with anyone about anything, Google-proof your reputation, and much more, Superconnector is a must-read for those seeking personal and business success.

Scott Gerber is the cofounder and CEO of CommunityCo, an organization that builds and manages professional membership communities for global brands. He is the founder of Young Entrepreneur Council (YEC), an invitation-only organization comprised of the world's most successful young entrepreneurs, and Forbes Councils, a collective of invitation-only organizations for world class executives. He is also a Special Advisor to Forbes Media. Scott is a sought-after public speaker, internationally syndicated business columnist, television commentator, and author of the book Never Get a "Real" Job.

Ryan Paugh is the cofounder and COO of CommunityCo. He first cofounded Brazen Technologies, which in its early years was recognized by Mashable as one of the top social networks for Gen Y. Ryan then went on to cofound Young Entrepreneur Council (YEC) in 2010.