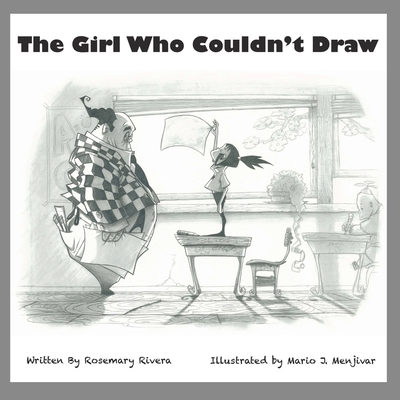 The Girl Who Couldn't Draw (Paperback)

Myra is a 7 year old determined to win the school art contest, but things take a wacky turn when the grownups see her work. A funny, Almost True story about what happens when adults forget how to think like a kid. A good read for kids and their grownups too.

Author Rosemary Rivera started writing when she was 7 years old, though some teachers didn't believe her, so they made her "write something" while they sat and watched. It was actually fun! She tried drawing too, but that's when she got in trouble. This story is based on that adventure. It didn't end the same way, though. She's still waiting for her talk show appearance. In the meantime she writes all sorts of stuff: articles, op-eds and even animated show ideas with her partner in crime, Mario. Her favorite pastime; hanging out with her Superboy, Tyler. Illustrator Mario Menjivar has been drawing since he was a little dude in a seaside town in Honduras, where he was known as the Boy Who Wouldn't Talk. Then he started talking and became the Boy With A Thousand Questions. He wound up in New York where he studied to be an artist, then got whisked away to Disney's world as an animator. He worked on all kinds of fun hand-drawn films, including Lion King, Hercules and Tarzan. He designs, illustrates, teaches at the School of Visual Arts and plays with his own little dude in NY with his wife, who lets him do all the drawing. For all their collaborations, this is Rosemary and Mario's first picture book together.
or
Buy Here
Copyright © 2020 American Booksellers Association