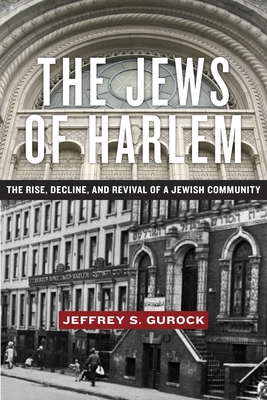 The Jews of Harlem (Hardcover)

The Rise, Decline, and Revival of a Jewish Community

New York Times columnist David W. Dunlap wrote a decade ago that "on the map of the Jewish Diaspora, Harlem Is Atlantis. . . . A vibrant hub of industry, artistry and wealth is all but forgotten. It is as if Jewish Harlem sank 70 years ago beneath waves of memory beyond recall." During World War I, Harlem was the home of the second largest Jewish community in America. But in the 1920s Jewish residents began to scatter to other parts of Manhattan, to the outer boroughs, and to other cities. Now nearly a century later, Jews are returning uptown to a gentrified Harlem. The Jews of Harlem follows Jews into, out of, and back into this renowned metropolitan neighborhood over the course of a century and a half. It analyzes the complex set of forces that brought several generations of central European, East European, and Sephardic Jews to settle there. It explains the dynamics that led Jews to exit this part of Gotham as well as exploring the enduring Jewish presence uptown after it became overwhelmingly black and decidedly poor. And it looks at the beginnings of Jewish return as part of the transformation of New York City in our present era. The Jews of Harlem contributes much to our understanding of Jewish and African American history in the metropolis as it highlights the ever-changing story of America's largest city. With The Jews of Harlem, the beginning of Dunlap's hoped-for resurfacing of this neighborhood's history is underway. Its contemporary story merits telling even as the memories of what Jewish Harlem once was warrants recall.

Jeffrey S. Gurock is Libby M. Klaperman Professor of Jewish History at Yeshiva University. A prize-winning author, he has written or edited fifteen books in American Jewish history. Gurock has served as chair of the Academic Council of the American Jewish Historical Society.He is the author of the recently published Parkchester: A Bronx Tale of Race and Ethnicity.
or support indie stores by buying on
Copyright © 2020 American Booksellers Association