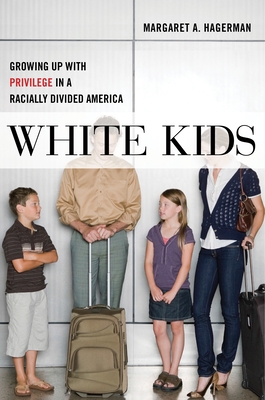 Winner, 2019 William J. Goode Book Award, given by the Family Section of the American Sociological Association

Finalist, 2019 C. Wright Mills Award, given by the Society for the Study of Social Problems

Riveting stories of how affluent, white children learn about race American kids are living in a world of ongoing public debates about race, daily displays of racial injustice, and for some, an increased awareness surrounding diversity and inclusion. In this heated context, sociologist Margaret A. Hagerman zeroes in on affluent, white kids to observe how they make sense of privilege, unequal educational opportunities, and police violence. In fascinating detail, Hagerman considers the role that they and their families play in the reproduction of racism and racial inequality in America. White Kids, based on two years of research involving in-depth interviews with white kids and their families, is a clear-eyed and sometimes shocking account of how white kids learn about race. In doing so, this book explores questions such as, "How do white kids learn about race when they grow up in families that do not talk openly about race or acknowledge its impact?" and "What about children growing up in families with parents who consider themselves to be 'anti-racist'?" Featuring the actual voices of young, affluent white kids and what they think about race, racism, inequality, and privilege, White Kids illuminates how white racial socialization is much more dynamic, complex, and varied than previously recognized. It is a process that stretches beyond white parents' explicit conversations with their white children and includes not only the choices parents make about neighborhoods, schools, peer groups, extracurricular activities, and media, but also the choices made by the kids themselves. By interviewing kids who are growing up in different racial contexts--from racially segregated to meaningfully integrated and from politically progressive to conservative--this important book documents key differences in the outcomes of white racial socialization across families. And by observing families in their everyday lives, this book explores the extent to which white families, even those with anti-racist intentions, reproduce and reinforce the forms of inequality they say they reject.

Margaret A. Hagerman is Associate Professor of Sociology at Mississippi State University. She is the author of White Kids: Growing Up With Privilege in a Racially Divided America, Winner of the 2019 William J. Goode Book Award, given by the Family Section of the American Sociological Association and Finalist for the 2019 C. Wright Mills Award, given by the Society for the Study of Social Problems.
Loading...
or support indie stores by buying on