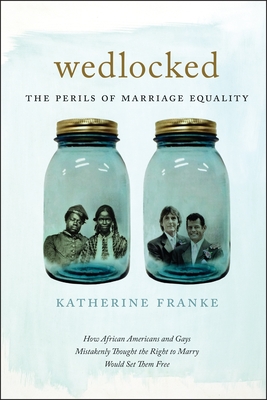 Compares today's same-sex marriage movement to the experiences of black people in the mid-nineteenth century.

The staggering string of victories by the gay rights movement's campaign for marriage equality raises questions not only about how gay people have been able to successfully deploy marriage to elevate their social and legal reputation, but also what kind of freedom and equality the ability to marry can mobilize. Wedlocked turns to history to compare today's same-sex marriage movement to the experiences of newly emancipated black people in the mid-nineteenth century, when they were able to legally marry for the first time. Maintaining that the transition to greater freedom was both wondrous and perilous for newly emancipated people, Katherine Franke relates stories of former slaves' involvements with marriage and draws lessons that serve as cautionary tales for today's marriage rights movements. While "be careful what you wish for" is a prominent theme, they also teach us how the rights-bearing subject is inevitably shaped by the very rights they bear, often in ways that reinforce racialized gender norms and stereotypes. Franke further illuminates how the racialization of same-sex marriage has redounded to the benefit of the gay rights movement while contributing to the ongoing subordination of people of color and the diminishing reproductive rights of women. Like same-sex couples today, freed African-American men and women experienced a shift in status from outlaws to in-laws, from living outside the law to finding their private lives organized by law and state licensure. Their experiences teach us the potential and the perils of being subject to legal regulation: rights--and specifically the right to marriage--can both burden and set you free.

Katherine Franke is the Sulzbacher Professor of Law and the Director of the Center for Gender and Sexuality Law at Columbia University. In addition to her academic work, she is the Chair of the Board of Directors of the Center for Constitutional Rights.
Loading...
or support indie stores by buying on