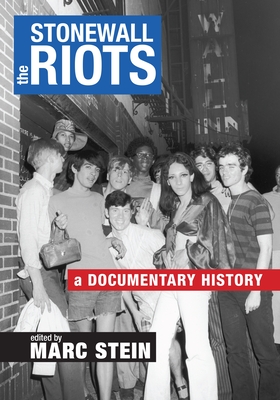 On the occasion of its fiftieth anniversary, the most important moment in LGBTQ history-depicted by the people who influenced, recorded, and reacted to it.

June 28, 1969, Greenwich Village: The New York City Police Department, fueled by bigoted liquor licensing practices and an omnipresent backdrop of homophobia and transphobia, raided the Stonewall Inn, a neighborhood gay bar, in the middle of the night. The raid was met with a series of responses that would go down in history as the most galvanizing period in this country's fight for sexual and gender liberation: a riotous reaction from the bar's patrons and surrounding community, followed by six days of protests. Across 200 documents, Marc Stein presents a unique record of the lessons and legacies of Stonewall. Drawing from sources that include mainstream, alternative, and LGBTQ media, gay-bar guide listings, state court decisions, political fliers, first-person accounts, song lyrics, and photographs, Stein paints an indelible portrait of this pivotal moment in the LGBT movement. In The Stonewall Riots, Stein does not construct a neatly quilted, streamlined narrative of Greenwich Village, its people, and its protests; instead, he allows multiple truths to find their voices and speak to one another, much like the conversations you'd expect to overhear in your neighborhood bar. Published on the fiftieth anniversary of the moment the first brick (or shot glass?) was thrown, The Stonewall Riots allows readers to take stock of how LGBTQ life has changed in the US, and how it has stayed the same. It offers campy stories of queer resistance, courageous accounts of movements and protests, powerful narratives of police repression, and lesser-known stories otherwise buried in the historical record, from an account of ball culture in the mid-sixties to a letter by Black Panther Huey P. Newton addressed to his brothers and sisters in the resistance. For anyone committed to political activism and social justice, The Stonewall Riots provides a much-needed resource for renewal and empowerment.

Marc Stein is the Jamie and Phyllis Pasker Professor of History at San Francisco State University. He is the author of Rethinking the Gay and Lesbian Movement (2012), Sexual Injustice: Supreme Court Decisions from Griswold to Roe (2010), and City of Sisterly and Brotherly Loves: Lesbian and Gay Philadelphia (2000), and the editor of the Encyclopedia of Lesbian, Gay, Bisexual, and Transgender History in America (2003).
or support indie stores by buying on
Copyright © 2020 American Booksellers Association