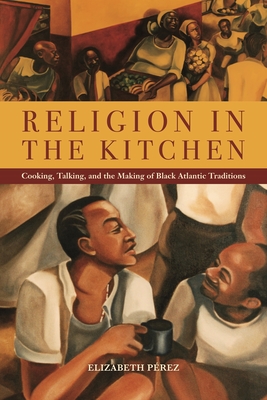 Religion in the Kitchen (Paperback)

Before honey can be offered to the Afro-Cuban deity Och n, it must be tasted, to prove to her that it is good. In African-inspired religions throughout the Caribbean, Latin America, and the United States, such gestures instill the attitudes that turn participants into practitioners. Acquiring deep knowledge of the diets of the gods and ancestors constructs adherents' identities; to learn to fix the gods' favorite dishes is to be "seasoned" into their service.

In this innovative work, Elizabeth P rez reveals how seemingly trivial "micropractices" such as the preparation of sacred foods, are complex rituals in their own right. Drawing on years of ethnographic research in Chicago among practitioners of Lucum , the transnational tradition popularly known as Santer a, P rez focuses on the behind-the-scenes work of the primarily women and gay men responsible for feeding the gods. She reveals how cooking and talking around the kitchen table have played vital socializing roles in Black Atlantic religions.

Entering the world of divine desires and the varied flavors that speak to them, this volume takes a fresh approach to the anthropology of religion. Its richly textured portrait of a predominantly African-American Lucum community reconceptualizes race, gender, sexuality, and affect in the formation of religious identity, proposing that every religion coalesces and sustains itself through its own secret recipe of micropractices.