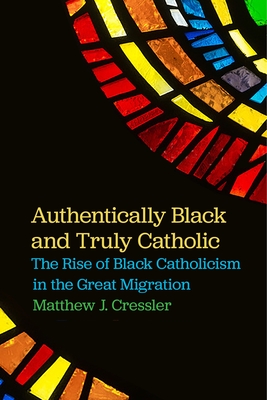 The Rise of Black Catholicism in the Great Migration

Chicago has been known as the Black Metropolis. But before the Great Migration, Chicago could have been called the Catholic Metropolis, with its skyline defined by parish spires as well as by industrial smoke stacks and skyscrapers. This book uncovers the intersection of the two. Authentically Black and Truly Catholic traces the developments within the church in Chicago to show how Black Catholic activists in the 1960s and 1970s made Black Catholicism as we know it today.
The sweep of the Great Migration brought many Black migrants face-to-face with white missionaries for the first time and transformed the religious landscape of the urban North. The hopes migrants had for their new home met with the desires of missionaries to convert entire neighborhoods. Missionaries and migrants forged fraught relationships with one another and tens of thousands of Black men and women became Catholic in the middle decades of the twentieth century as a result. These Black Catholic converts saved failing parishes by embracing relationships and ritual life that distinguished them from the evangelical churches proliferating around them. They praised the "quiet dignity" of the Latin Mass, while distancing themselves from the gospel choirs, altar calls, and shouts of "amen " increasingly common in Black evangelical churches.

Their unique rituals and relationships came under intense scrutiny in the late 1960s, when a growing group of Black Catholic activists sparked a revolution in U.S. Catholicism. Inspired by both Black Power and Vatican II, they fought for the self-determination of Black parishes and the right to identify as both Black and Catholic. Faced with strong opposition from fellow Black Catholics, activists became missionaries of a sort as they sought to convert their coreligionists to a distinctively Black Catholicism. This book brings to light the complexities of these debates in what became one of the most significant Black Catholic communities in the country, changing the way we view the history of American Catholicism.