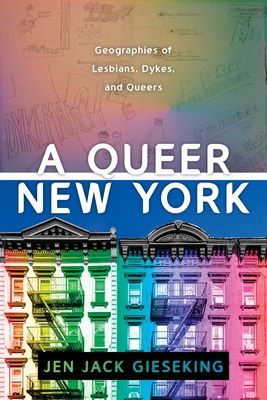 Geographies of Lesbians, Dykes, and Queers

Winner, 2021 Glenda Laws Award given by the American Association of Geographers

The first lesbian and queer historical geography of New York City Over the past few decades, rapid gentrification in New York City has led to the disappearance of many lesbian and queer spaces, displacing some of the most marginalized members of the LGBTQ+ community. In A Queer New York, Jen Jack Gieseking highlights the historic significance of these spaces, mapping the political, economic, and geographic dispossession of an important, thriving community that once called certain New York neighborhoods home. Focusing on well-known neighborhoods like Greenwich Village, Park Slope, Bedford-Stuyvesant, and Crown Heights, Gieseking shows how lesbian and queer neighborhoods have folded under the capitalist influence of white, wealthy gentrifiers who have ultimately failed to make room for them. Nevertheless, they highlight the ways lesbian and queer communities have succeeded in carving out spaces--and lives--in a city that has consistently pushed its most vulnerable citizens away. Beautifully written, A Queer New York is an eye-opening account of how lesbians and queers have survived in the face of twenty-first century gentrification and urban development.

Jen Jack Gieseking is an urban and digital cultural geographer and environmental psychologist. They are Assistant Professor of Geography at the University of Kentucky, where she teaches courses on digital studies and queer geographies.
Loading...
or support indie stores by buying on