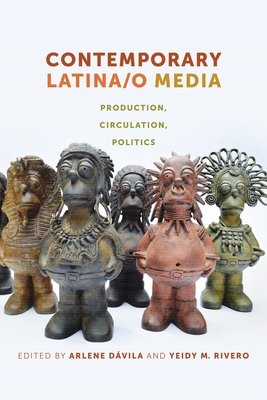 Just ten years ago, discussions of
Latina/o media could be safely reduced to a handful of TV channels, dominated
by Univision and Telemundo. Today, dramatic changes in the global political
economy have resulted in an unprecedented rise in major new media ventures for
Latinos as everyone seems to want a piece of the Latina/o media market. While
current scholarship on Latina/o media have mostly revolved around important
issues of representation and stereotypes, this approach does not provide the
entire story.

In Contemporary Latina/o Media,
Arlene D vila and Yeidy M. Rivero bring together an impressive range of leading
scholars to move beyond analyses of media representations, going behind the
scenes to explore issues of production, circulation, consumption, and political
economy that affect Latina/o mass media. Working across the disciplines of
Latina/o media, cultural studies, and communication, the contributors examine
how Latinos are being affected both by the continued Latin Americanization of
genres, products, and audiences, as well as by the whitewashing of "mainstream"
Hollywood media where Latinos have been consistently bypassed. While focusing
on Spanish-language television and radio, the essays also touch on the state of
Latinos in prime-time television and in digital and alternative media. Using a
transnational approach, the volume as a whole explores the ownership,
importation, and circulation of talent and content from Latin America, placing
the dynamics of the global political economy and cultural politics in the
foreground of contemporary analysis of Latina/o media.

Arlene Davila is Professor of Anthropology and American Studies at NYU. Her books include Culture Works: Space, Value and Mobility Across the Neoliberal Americas (2012) and Latino Spin: Public Image and the Whitewashing of Race (2008), both available from NYU Press.
or
Buy Here
Copyright © 2020 American Booksellers Association