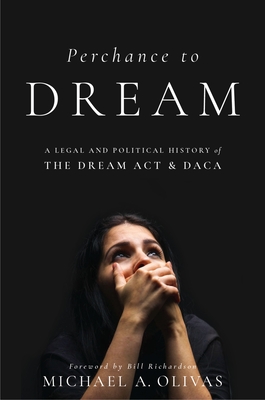 In 1982, the Supreme Court of the United States ruled in Plyler v. Doe that undocumented children had the right to attend public schools without charge or impediment, regardless of their immigration status. The ruling raised a question: what if undocumented students, after graduating from the public school system, wanted to attend college? Perchance to DREAM is the first comprehensive history of the DREAM Act, which made its initial congressional appearance in 2001, and Deferred Action for Childhood Arrivals (DACA), the discretionary program established by President Obama in 2012 out of Congressional failure to enact comprehensive immigration reform. Michael A. Olivas relates the history of the DREAM Act and DACA over the course of two decades. With the Trump Administration challenging the legality of DACA and pursuing its elimination in 2017, the fate of DACA is uncertain. Perchance to DREAM follows the political participation of DREAMers, who have been taken hostage as pawns in a cruel game as the White House continues to advocate anti-immigrant policies. Perchance to DREAM brings to light the many twists and turns that the legislation has taken, suggests why it has not gained the required traction, and offers hopeful pathways that could turn this darkness to dawn.