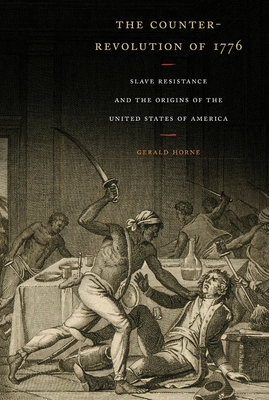 The Counter-Revolution of 1776 (Hardcover)

Slave Resistance and the Origins of the United States of America

The successful 1776 revolt against British rule in North America has been hailed almost universally as a great step forward for humanity. But the Africans then living in the colonies overwhelmingly sided with the British. In this trailblazing book, Gerald Horne shows that in the prelude to 1776, the abolition of slavery seemed all but inevitable in London, delighting Africans as much as it outraged slaveholders, and sparking the colonial revolt. Prior to 1776, anti-slavery sentiments were deepening throughout Britain and in the Caribbean, rebellious Africans were in revolt. For European colonists in America, the major threat to their security was a foreign invasion combined with an insurrection of the enslaved. It was a real and threatening possibility that London would impose abolition throughout the colonies--a possibility the founding fathers feared would bring slave rebellions to their shores. To forestall it, they went to war. The so-called Revolutionary War, Horne writes, was in part a counter-revolution, a conservative movement that the founding fathers fought in order to preserve their right to enslave others. The Counter-Revolution of 1776 brings us to a radical new understanding of the traditional heroic creation myth of the United States.

Gerald Horne is Moores Professor of History and African-American Studies at the University of Houston. His books include "Race Woman: The Lives of Shirley Graham Du Bois" and "Race War!: White Supremacy and the Japanese Attack on the British Empire" (both available from NYU Press).
or support indie stores by buying on
Copyright © 2020 American Booksellers Association