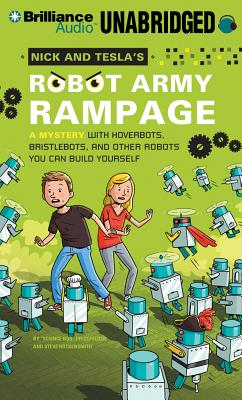 A Mystery with Hoverbots, Bristlebots, and Other Robots You Can Build Yourself

WARNING: Contains walking, buzzing, and flying robots you can build yourself

When a rash of robberies hits the town of Half Moon Bay, 11-year-old sleuths Nick and Tesla are determined to catch the criminals--but to do so, they'll have to build a host of new gadgets and gizmos In this robot-themed follow-up to Nick and Tesla's High-Voltage Danger Lab, the brother-and-sister duo build four different droids out of ordinary household objects--and illustrated instructions are included in a handy booklet, so you can build them, too Can Nick and Tesla catch the criminal mastermind--and foil his army of rampaging robots--before it's too late?