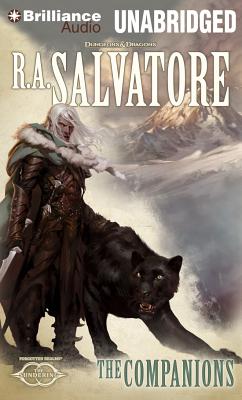 On the dusty plains of Netheril, a young Bedine girl spins a web of forbidden magic, obliterating a pair of assassins with a single lightning strike.

On the banks of the Sea of Fallen Stars, a tiny thief walks willingly into battle with a ruthless killer, a wide grin upon his face.

In the tunnels of Citadel Felbarr, a dwarfling is ambushed and strikes back with an attack well beyond his apparent strength and years.

These three seemingly unrelated commoners, growing up across the far reaches of the Forgotten Realms(R), hold the fate of Faerun's most famous dark elf, Drizzt Do'Urden, in their hands.

But that fate is far from certain. For in the shadows a cunning cabal of wizards is watching, intent on hunting Chosen--mortals blessed by the gods. These wizards know something mere commoners do not: Long-forgotten gods have begun to stir. Long-lost lands have begun to tremble. The world around them is about to change. And these wizards will do whatever it takes to turn the coming chaos to their advantage.

In this first book of the six-book Sundering series, New York Times bestselling author R.A. Salvatore launches a major world-shaping event that will revive old favorites, introduce new complications, and move his signature hero Drizzt into a restored era of the Forgotten Realms.